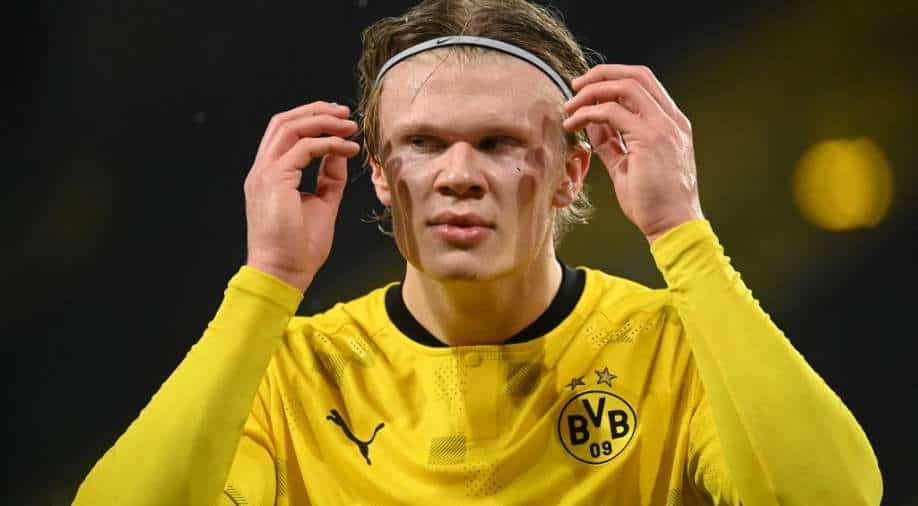 City announced on Monday that their all-time top scorer Aguero would leave the club at the end of the season, leaving manager Pep Guardiola, who has only one other central striker in Gabriel Jesus, badly in need of a top-quality striker.

The 20-year-old Haaland, widely reported to be City's number one choice, was close to joining local rivals Manchester United last January before moving to Dortmund.

United remain firmly interested in signing the prolific forward who worked under their Norwegian manager Ole Gunnar Solskjaer as an emerging talent with Molde.

Haaland's goalscoring record is extraordinary: Since joining Dortmund from RB Salzburg he has scored 49 goals in 49 games in all competitions. At the highest level, in the Champions League, Haaland has scored 12 goals in eight games.

The blond-haired striker made his mark with eight goals in six Champions League games with Salzburg along with 29 in 27 appearances in the Austrian league.

Last year he was available for just 20 million euros based on a buyout clause in his deal with Salzburg, and given Solskjaer's relationship with Haaland, United were confident of signing the continent's most exciting goalscorer at a bargain price.

But Haaland's agent Mino Raiola, who is also Paul Pogba's representative, has had a turbulent relationship with the Old Trafford hierarchy, whom he has publicly criticised.

The forward opted to join Dortmund, but Raiola suggested on Tuesday that may have been a mistake.

"With Haaland, everybody was wrong. He did things much quicker than everybody imagined," the Dutch-Italian agent told The Athletic website.

"Haaland is in front of his own development. He is ahead of his own schedule. Maybe I was too careful when I said, 'Oh no, let's move to Dortmund instead of I-don't-know-where'," he said.

"I'm 100% convinced and everybody's convinced — (he) can move to any club, wherever he wants, already on this level. And he could have done that last year," he said.

United recently promoted John Murtough to be their Football Director, effectively heading the club's transfer strategy, and he will quickly be under pressure to deliver some major upgrades for Solskjaer ahead of next season.

United have struggled to land high-profile targets in recent years, and as well as missing out on Haaland, failed to reach agreement with Dortmund on England winger Jadon Sancho last year.

City have a much better record in signing their top targets, and adding to the mix, Haaland's father Alf-Inge also played for the club.

United and City each have the resources to make the right offer to both Dortmund and the player, but it would be no surprise if other top European clubs were to join the race in what could become a record-breaking deal.