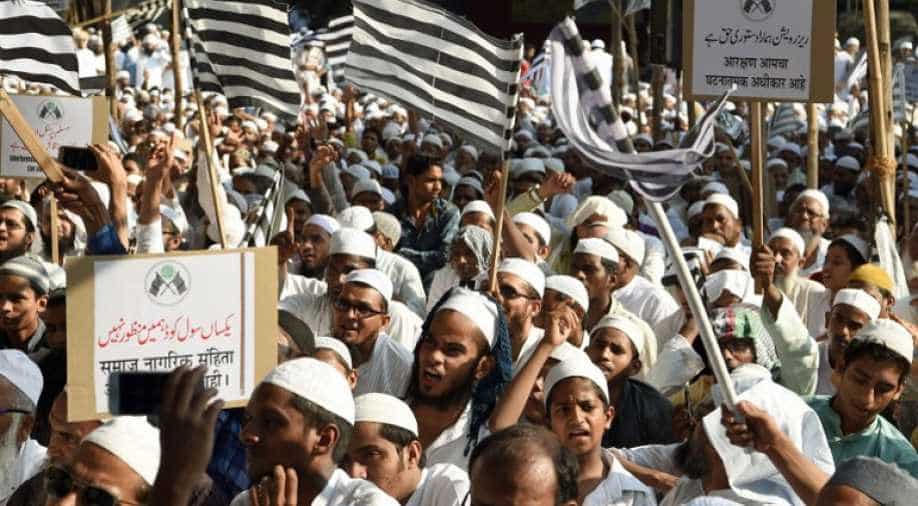 Indian Muslims protest the implementation of a Uniform Civil Code at a rally in Mumbai on October 20. Photograph:( AFP )

The All India Muslim Personal Law Board (AIMPLB) on Saturday decided to oppose tooth and nail the Centre’s move against the triple talaq and the imposition of Unform Civil Code in the country.

The decision was taken on the second day of the three-day closed door convention of AIMPLB, to discuss issues ranging from triple talaq, Uniform Civil Code (UCC) to other religious matters of the Muslims.

“It has been unanimously decided in the convention that we want triple talaq to stay and we will oppose any move by the government against it. We will also oppose uniform civil code.

The triple talaq has been going on for ages and it is part of our religious rights,” TMC MP and chairman of AIMPLB reception committee Sultan Ahmed told PTI.

The AIMPLB has already launched a signature campaign opposing the move and more than 10 crore Muslim women from across the country have signed supporting the practice of triple talaq.

The issue of alleged harassment of Muslim youth was also taken up during the convention.

“Our President Maulana Rabey Hasani Nadvi, during his speech, has clearly said that the BJP government at the Centre has taken up an agenda of unnecessarily harassing the Muslims of the country especially the young generation. The government has the tendency to implicate the Muslims as anti-nationals and harass them,” a member of the AIMPLB told PTI on condition of anonymity.

He said the BJP is trying to infringe upon the religious rights of Muslims and it will not be tolerated.

“Muslims are part of this great secular, democratic republic India. We will fight against this communal designs of the BJP government”.