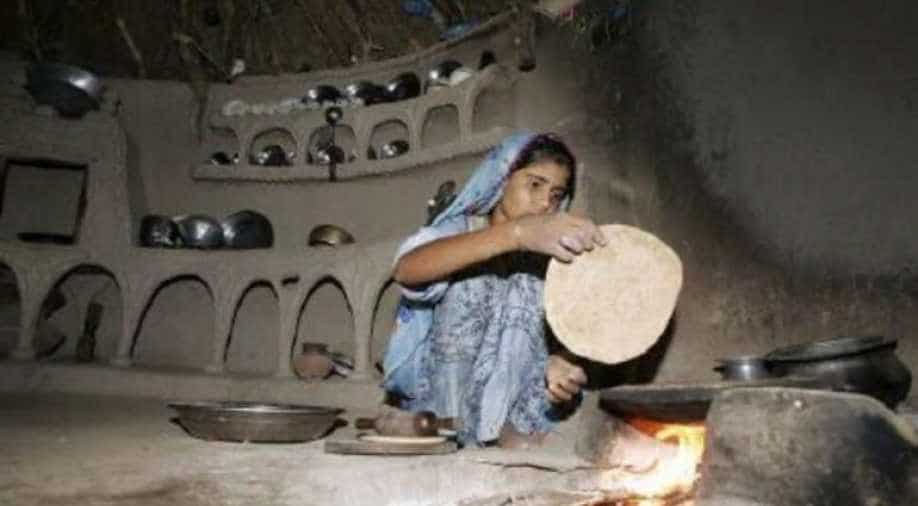 File photo: A villager prepares roti in her mud house in the village Bhattian Jivery at Tharparkar. Photograph:( Reuters )

The Nanbais (bread makers) of Khyber Pakhtunkhwa are on a strike against the government, as various associations in Punjab had given a five-day ultimatum to the government asking it to provide them flour at the previous rates or allow them to raise the prices of wheat and wheat products.

Pakistan is facing a massive food crisis. Wheat flour shortage has hit the people of the country which has, in turn, resulted in anger amongst the public against the Imran Khan government.

The crisis, which has been looming for the past several months, became even more severe even after prime minister Imran Khan issued orders to the provincial governments to play an active role in curbing food prices, profiteering and hoarding.

The Nanbais (bread makers) of Khyber Pakhtunkhwa are on a strike against the government, as various associations in Punjab had given a five-day ultimatum to the government asking it to provide them flour at the previous rates or allow them to raise the prices of wheat and wheat products.

While the flour crisis has equally hit all the four provinces and the federal capital, the blame game has ensued between the two. The provincial governments have blamed the federal govt led by Imran Khan for the wheat crisis and subsequent increase in flour prices.

People are being forced to buy flour at a highest-ever price of about Rs70 per kg in Lahore, Karachi and other cities, which is about 6 to 10rs higher than what it usually costs.

However, according to Pakistan's national food security body,  the recent strike of transporters was the main reason behind the short supply of wheat. It believes the “temporary” crisis would be over within days and the situation would further improve with the arrival of the new wheat crop in March-April.

Meanwhile, opposition leaders have slammed the Imran khan govt for the food crisis. Condemning the surge in wheat prices, opposition leader and head of Pakistan Muslim League-Nawaz (PML-N) Shahbaz sharif in a statement from London said the government’s incompetence had triggered the crisis and demanded strict action against those responsible.

PPP chairman Bilawal Bhutto-Zardari said the Imran Khan’s government had turned the country, which was a wheat exporter, into a wheat importer. He alleged that the federal government had sent 40,000 metric tonnes of wheat to Afghanistan, and thus, intentionally had created a wheat crisis.

And in a bizarre response to the looming crisis, Pakistan minister Sheikh Rashid said that the staple food is being sold at exorbitant rates across Pakistan as people "eat more bread in November and December".

Khyber Pakhtunkhwa minister Shaukat Yousuf Zai came up with an even more shocking remark, where he urged people to not eat fine flour, saying it causes stomach cancer.