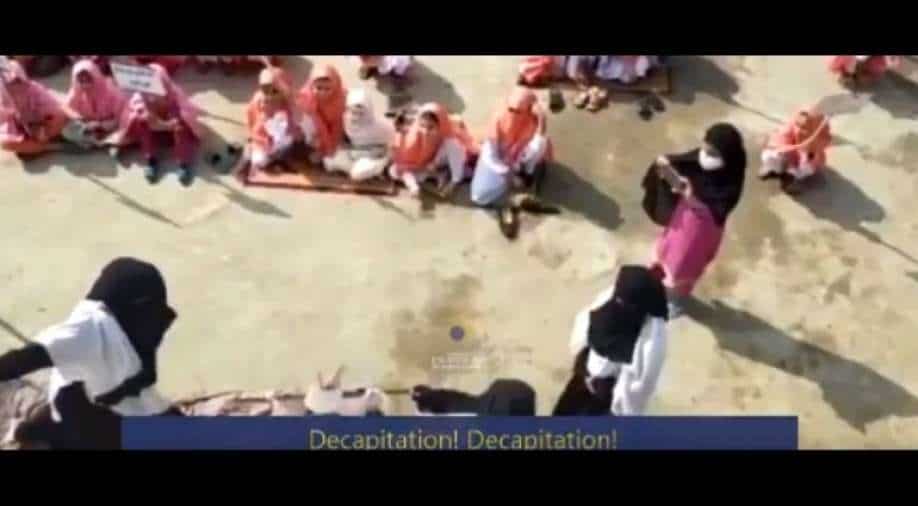 Through this exercise, the girls are being taught that those who 'insult' the Prophet will have only one punishment, and that will be decapitation

Young girls in Pakistan are being taught how to behead a human being to make sure they can get 'vengeance' on France after the French magazine Chalie Hebdo republished a cartoon that 'insulted' Prophet Mohammed.

In a video posted on the social media platform Twitter, several young girls wearing a burka, with covered faces, can be seen holding a scimitar and imitating the actions of a 'teacher' who is teaching the girls how to hold and use a scimitar on an effigy to behead the figure.

Through this exercise, the girls are being taught that those who 'insult' the Prophet will have only one punishment, and that will be decapitation. Girls, dressed in Pink, can be heard chanting slogans related to decapitation.

Religious school in Pakistan is teaching children how to behead people who insult Prophet Muhammad. They threaten #France and antagonize cartoonists. pic.twitter.com/BA1tjNvzkB

A handful women can also be seen recording videos of these 'training' sessions, which few believe is a way to promote fear among the rest of the world by posting these training videos on social media.

The video has started circulating on the internet and many have claimed that the effigy is of the French President Emmanuel Macron who said the terror attacks in the country were a result of extremism in the Islam religion. His comment attracted a lot of protests and criticism towards him.

The video has attracted extreme criticism on all social media platforms as the world believes the young girls are being filled with hatred for humanity and are being taught to rely on violence rather than being taught to express their "disagreements in a civilised manner," a Twitter user commented.