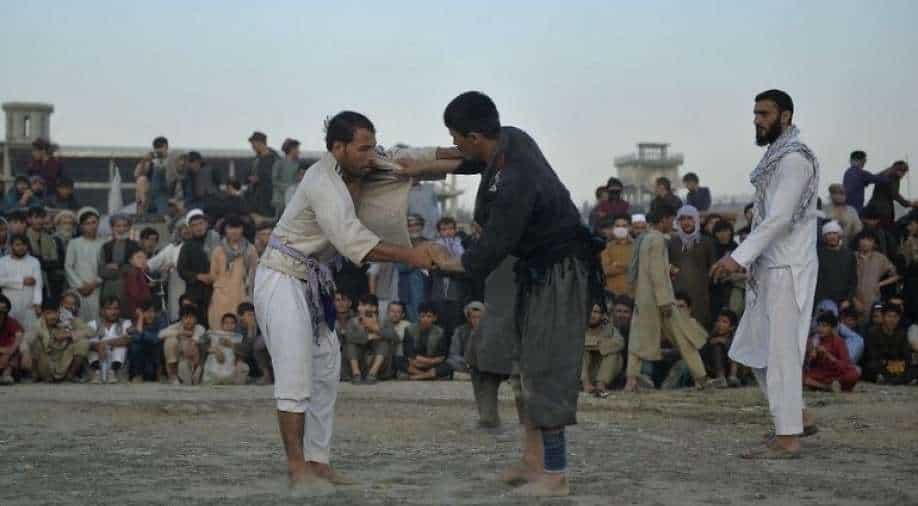 Fighters from around Afghanistan perform their judo and wrestling skills during a gathering in Chaman-e-Huzuri park, downtown Kabul. Photograph:( AFP )

Some Afghan fighters can be seen gathering on a public field in Kabul every weekend to fight in the pits. This sport seems like a mix of judo and wrestling. These fights are attracting big crowds. Fans can be seen cheering for their favourites

Under the Taliban rule in Afghanistan, Kabul seems to be getting a whole new look.

At a time when women’s freedoms are being curbed, some fighters from around the country are gathering on a public field in the capital every weekend.

No, they are not looking to come up with a revolt, but fighting against each other in the pits. This sport seems like a mix of judo and wrestling.

These gatherings have been attracting big partisan crowds. And fans can be seen cheering for their favourites, an AFP report said.

Also Read: Driving training centre for women on verge of closure in Kabul

After disposing of his opponent, Mohammad Atef, a well-built 31-year-old from Samangan province in northern Afghanistan, said "I have been fighting for 17 years."

"It is popular is Samangan, Kunduz, Baghlan -- and there are many famous wrestlers in Sheberghan too," added Atef.

These fighters battle it out on a dusty field. Referees are also present to make sure an obscure set of rules is followed and winner is declared without any cheating.

The bouts are usually settled quickly. After disposing rival with an acrobatic throw, "Today my competitor was from Kunduz. I used a spiral technique to finally defeat him," said Atef.