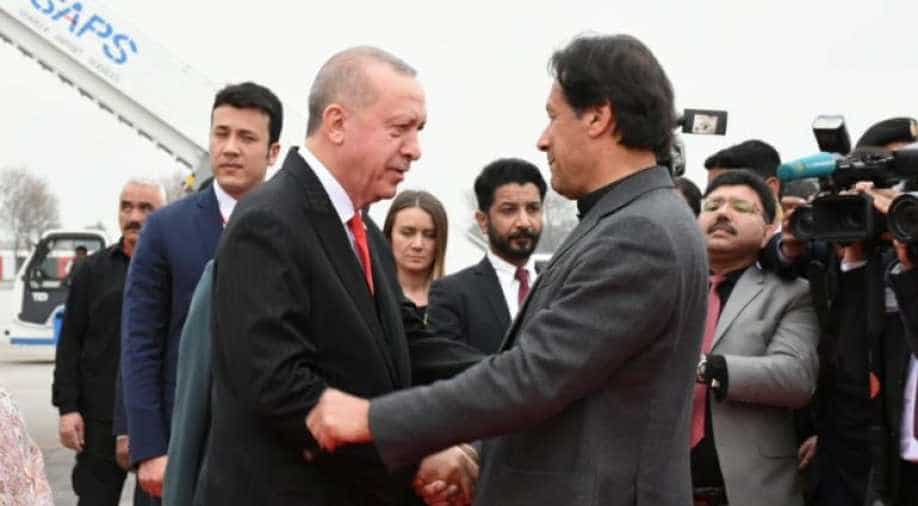 The Financial Action Task Force (FATF), which tackles money laundering, told Islamabad late last year that it could face blacklisting if it continued to apply inadequate controls over terrorism financing.

Turkish President Tayyip Erdogan on Friday said he would help Pakistan stay off a terrorism financing blacklist at a meeting of a global financial watchdog, a move he suggested would counter "political pressure" from Islamabad's critics.

The Financial Action Task Force (FATF), which tackles money laundering, told Islamabad late last year that it could face blacklisting if it continued to apply inadequate controls over terrorism financing.

The FATF is meeting next week in France, and support from Turkey and longtime allies like China, Malaysia and Saudi Arabia could help Pakistan remain off the blacklist. A minimum of three votes are required for any country to escape the blacklisting.

If it joined the blacklist alongside Iran and North Korea, Islamabad would face sanctions and economic setbacks at a time when its economy is struggling with a balance of payment crisis.

"We will be supporting Pakistan at the Financial Action Task Force meetings, where Pakistan is subject to political pressure," Erdogan told Pakistan's parliament a day after he arrived in Islamabad.

The FATF already has Pakistan on its "gray-list" of countries with inadequate controls over curbing money laundering and terrorism financing.

But its arch-rival India, which came close to war with its nuclear-armed neighbour last year, wants Pakistan blacklisted.

Of 40 recommendations made by the watchdog, Pakistan had fully complied with only one, largely complied with nine, partially complied with 26, and totally missed four parameters, which were mandatory if Islamabad wanted to be removed from the gray-list, a review by the group last year said.

Pakistan says it has made a significant improvement on the requirements since the last review.

Islamabad says it has seized the groups' assets and put the militants on trials, like the entire leadership of the JuD, including its chief Hafiz Saeed, the alleged mastermind of the 2008 Mumbai attacks in India, which killed 166 people.

In a move praised by Washington as an important step forward, Saeed was jailed for 11 years on Wednesday on terrorism financing charges.