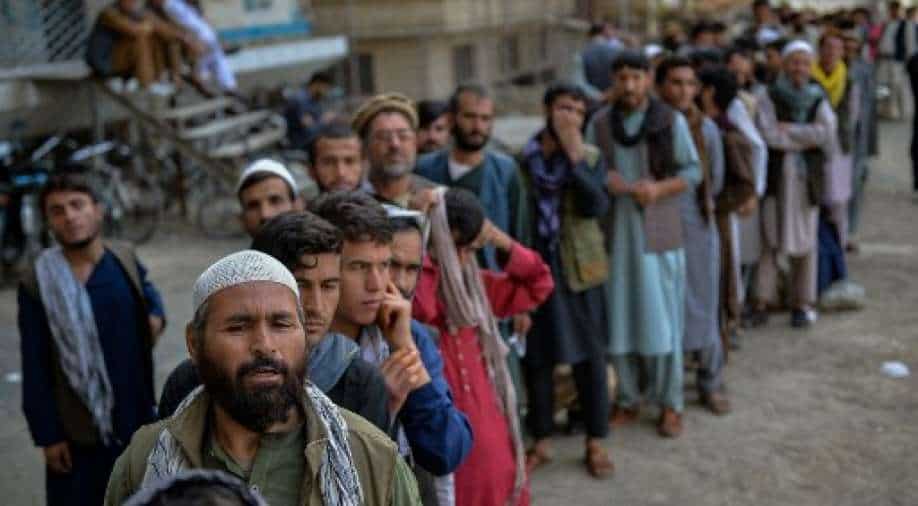 Afghans queue up as they wait for the banks to open and operate at a commercial area in Kabul Photograph:( AFP )

Taliban had earlier ordered banks to reopen in Kabul and appointed officials to run key ministries in Afghanistan.

Hamdullah Nomani the newly appointed mayor of Kabul imposed Sharia law in the Afghan capital, Afghan news reports said as the Taliban set about consolidating its control over Afghanistan.

Nomani reportedly said companies will be paid their dues and corrupt officials will be dwelt with in accordance with Sharia law, according to Pajhwok Afghan news. The development comes amid reports of corruption in Kabul's municipality.

Taliban had earlier ordered banks to reopen in the country with withdrawals of $200 or 20,000 Afghanis allowed weekly.

Taliban spokesman Zabihullah Mujahid had said earlier that officials have been appointed to run key institutions including public health and education ministry including the central bank.

The spokesman added that the new cabinet would be appointed "in one or two weeks" even as the country recovers from the chaos at Kabul airport amid the US pullout as the Taliban stormed into the capital on August 15.

Also Read: We expect US to reopen embassy in Kabul, have trade relations, says Taliban

The Afghan currency has reportedly plummeted amid the chaos of the last two weeks with rising food prices hitting the people as banks remained shut for two weeks after the Taliban came to power in Afghanistan.

"The fall of Afghani against foreign currency is temporary and it is because of the situation that suddenly changed, it will come back to normal once the government system starts functioning," Mujahid had said earlier as the country battles economic hardships with major Western countries pulling out their personnel from the capital.

Meanwhile, Qatar said isolating the Taliban would lead to further instability while urging countries to engage with the group.

"If we are starting to put conditions and stopping this engagement, we are going to leave a vacuum, and the question is, who is going to fill this vacuum?," Sheikh Mohammed said in Doha.

The Taliban hasn't been officially recognised so far by any country since they entered Kabul on August 15 even as Qatar's Sheikh Mohammed said the militant group had shown openness towards the idea of an inclusive government.