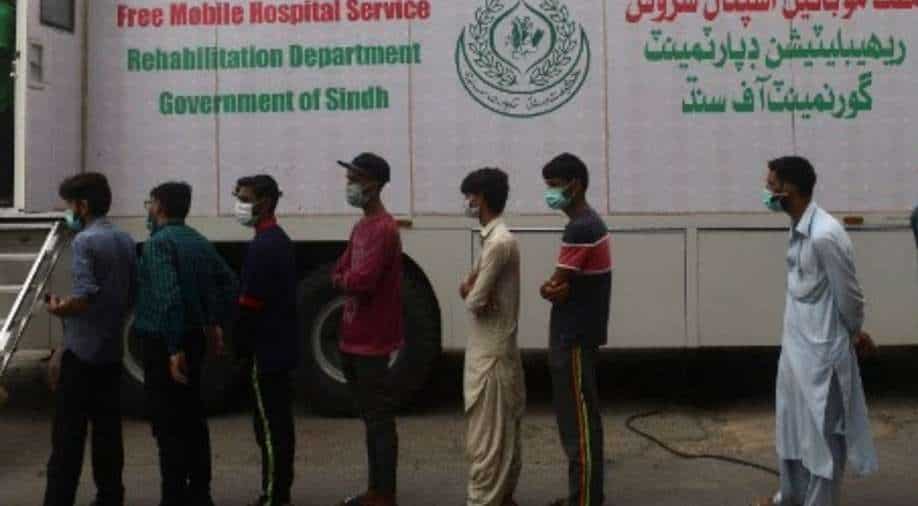 This is a file photo of people standing in a queue as they wait to receive a dose of the COVID-19 vaccine in Karachi. Photograph:( AFP )

A recent survey on coronavirus (COVID-19) showed that 28 per cent of Pakistanis think that the pandemic had already come to an end, as reported by Pakistan-based media outlet The Dawn.

The above-mentioned survey was conducted by a market research company in 34 countries. The result of the survey shows that Pakistan had the highest share of those who thought the pandemic was over as compared with a mere nine per cent of people in other countries.

The media report also added that while replying to another question, at least 14 per cent believed that the pandemic may never end.

The survey, titled 'Covid-19: Will The Pandemic Ever End and How Will We Know?' was conducted by Ipsos and it sampled 22,023 adults aged between 18-74 years.

The country is witnessing a surge in Covid cases as Pakistani authorities have warned that Omicron-driven fifth wave has started.

The National Command and Operation Centre (NCOC) held a meeting on Monday and discussed the epidemic curve chart data, national vaccine strategy and disease prevalence across the country.

NCOC is the main body governing the policies and implementation of the national COVID-19 effort of Pakistan.

The meeting was held after 708 cases were recorded in a single day - the highest since October 30 when 733 infections were detected, The News International reported.

The meeting also reviewed the spread of disease and it is revealed that "the fifth wave of COVID-19 which is Omicron-driven is spreading at a great pace."