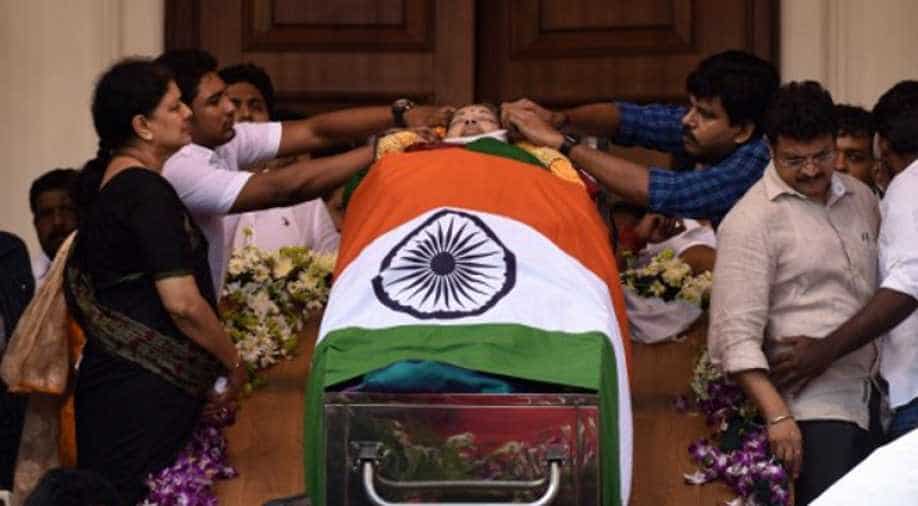 Hailing from a humble background from Mannargudi in south Tamil Nadu, 'Chinnamma' as Sasikala was known in her circles gradually gained acceptance in the Veda Nilayam residence, and even wielded influence in AIADMK at one point of time.? Photograph:( AFP )

Clad in a black saree, a sombre-looking Sasikala Natarajan, who remained a wall of support for Jayalalithaa through thick and thin, remained beside the casket of the departed leader as people filed past it paying their homage.

Intermittently standing up and touching Jayalalithaa's face, which was kept in state at Rajaji Hall, Sasikala looked lost even as she acknowledged the condolences of visitors.

Jayalalithaa's demise is seen as a personal loss for the 59-year-old Sasikala who was probably one of the few occupants of the chief minister's Veda Nilayam residence at Poes Garden besides assistants and officials.

Ever since Jayalalithaa was hospitalised on September 22, Sasikala remained with her, giving the ailing AIADMK supremo much needed emotional support.

The relationship between the two had kicked up many a storm during Jayalalithaa's three decades of political career with some blaming her proximity to Sasikala for the AIADMK's electoral defeats on some occasions.

Both were accused in the infamous disproportionate assets case and were convicted by a trial court in Bengaluru, though the Karnataka High court later reversed the lower court order.

Incidentally, Jayalalithaa had twice fallen out with Sasikala a few years ago for alleged anti-party activities.

She and some of her family members had been expelled from the party and asked to vacate Jayalalithaa's Poes Garden residence. However, the separation between the two was short-lived as they patched up in no time.

Sasikala then continued to accompany Jayalalithaa at various functions including the latter's election campaigns in her special vehicle, earning the sobriquet of 'Jayalalithaa's shadow' by detractors.

Sasikala would usually be seen seated in the rear seat of the vehicle, merely watching Jayalaithaa's electoral addresses, and providing her 'akka' (sister) with assistance.

She had come in contact with Jayalalithaa in the 80s as a video company owner, getting the leader's various events covered.

Hailing from a humble background from Mannargudi in south Tamil Nadu, 'Chinnamma' as Sasikala was known in her circles gradually gained acceptance in the Veda Nilayam residence, and even wielded influence in AIADMK at one point of time.