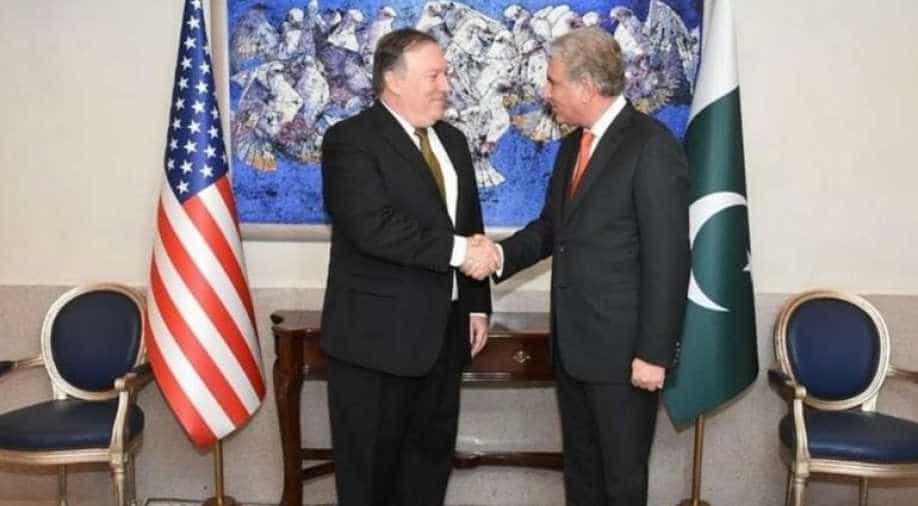 The two leaders spoke over phone on Thursday and reiterated the strength of the India-US relationship to advance peace, prosperity and security in the Indo-Pacific region and around the globe

US Secretary of State Mike Pompeo spoke with Pakistan Foreign Minister Shah Mehmood Qureshi over phone and the two leaders discussed the Afghan peace process and regional stability, his spokesperson said on Friday.

"Secretary Pompeo and Minister Qureshi discussed a range of issues, including the importance of US-Pakistan cooperation on the Afghan peace process and the importance of efforts to support regional stability," said Cale Brown, State Department's Principal Deputy Spokesperson.

Pompeo's telephonic talks with Qureshi came a day after the Secretary of State spoke to External Affairs Minister S Jaishankar and discussed a range of issues.

The two leaders spoke over phone on Thursday and reiterated the strength of the India-US relationship to advance peace, prosperity and security in the Indo-Pacific region and around the globe, Brown said on Thursday.

During the phone call, Jaishankar and Pompeo discussed the ongoing bilateral and multilateral cooperation on the issues of international concern, including efforts to combat the COVID-19 pandemic, support the peace process in Afghanistan, and address the recent destabilising actions in the region, Brown said in a readout of the telephonic conversation.

In Islamabad, the Pakistan Foreign Office said in a statement that Qureshi and Pompeo discussed bilateral relations, and developments in the region with a view to promoting peace, prosperity and stability.
Qureshi said he discussed the Kashmir issue with Pompeo.

Reviewing the recent developments in Afghanistan, Qureshi reiterated Pakistan's steadfast commitment to supporting all efforts for an inclusive and comprehensive political settlement.

He stressed that the Afghan peace process should be pursued in all earnest. Noting the holding of Loya Jirga, he expressed the hope that a conducive environment would be created for the earliest convening of the intra-Afghan negotiations.

Stressing the importance of the Pakistan-US Relationship, the Foreign Minister stated that the leadership of both countries was committed to further strengthen it. He added that Pakistan would be a partner for peace with the US.
Exchanging notes on the COVID-19 pandemic, Foreign Minister thanked Secretary Pompeo for the US support and assistance.

The talks between Pompeo and Qureshi also come after Special US Representative for Afghanistan Reconciliation Zalmay Khalilzad travelled to Qatar, Pakistan and Uzbekistan in June as part of his sustained effort to bring peace in the war-torn country.

The Taliban has kept up violence against Afghan government forces.

An agreement signed between the US and the Taliban in February in Doha drew up plans for withdrawal of American troops from Afghanistan in exchange for security guarantees from the insurgent group.

As part of the Doha deal, the US has committed to withdraw its 12,000 troops within 14 months. Troops have since been reduced by over a quarter, according to a recent report on Afghanistan published by the Congressional Research Service.