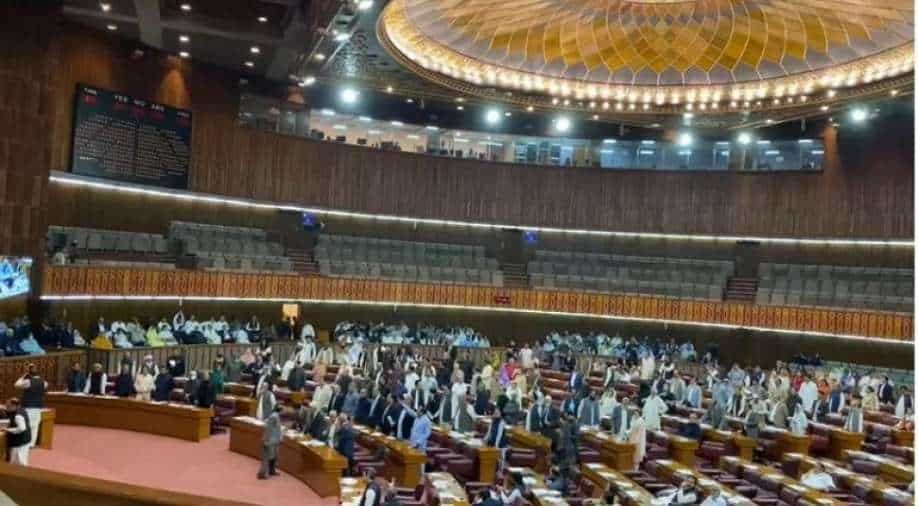 In the 342-member house, 174 MPs voted in favour of the resolution of vote of no-confidence against Imran Khan, and it was passed by the National Assembly. Photograph:( Others )

After the National Assembly passed the no-confidence motion against the Imran Khan-led government on Sunday, the opposition party members hailed the achievement and noted that a “new chapter” is going to begin in Pakistan politics.

Immediately after the voting tally was announced, parliamentarian Sardar Ayaz Sadiq, who conducted the no-confidence session after Speaker Asad Qaiser resigned, noted that the absence of former prime minister Nawaz Sharif was felt by the opposition party members.

Leader of Opposition Shahbaz Sharif thanked every party member who voted to oust Imran Khan, saying that “the wishes of millions of people have been granted by the almighty”.

“We thank the people of Pakistan. Because of them, Pakistan will see a new chapter. We do miss Nawaz Sharif here,” he said.

Recalling the incident where the opposition party members were jailed months before the no-confidence voting, Sharif said, “These friends of ours have been sent to prison, and we will never forget it.”

He asserted that the new government won’t take revenge on Khan, but noted that “law will take its own course”.

He said, “I want to congratulate everyone. I have been a member of this house for 3-4 years… And I learn lot in these years. I want to tell the youth that nothing is impossible.”

In the 342-member house, 174 MPs voted in favour of the resolution of vote of no-confidence against Imran Khan, and it was passed by the National Assembly.

Notably, Khan and parliamentarians from his party were not present when the voting on no-confidence took place.

Minutes after the session resumed, Qaiser announced, “I can't sit in the chair. I am resigning from the post.”

Immediately after that, parliamentarian Sardar Ayaz Sadiq took over the chair of the speaker and started conducting the no-trust vote, even as the PTI members walked out of the parliament.

According to reports, Imran Khan and his personal staff left the Prime Minister's House, ending the three-and-a-half-years of a tumultuous premiership, which was marked by reported tiffs with Pakistan Army chief Bajwa, economic instability and high inflation.

Meanwhile, a request has been made in the Islamabad High Court to put Imran Khan, Shah Mehmood Qureshi, and Fawad Chaudhary be put on the Exit Control List of Pakistan, effectively barring them from leaving the country, reports Geo News.