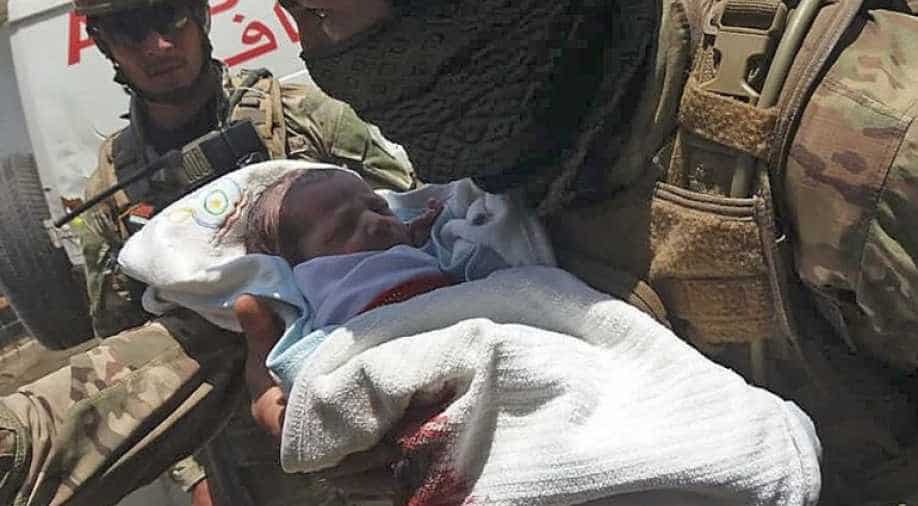 An Afghan security personnel carries a newborn baby from a hospital, at the site of an attack in Kabul on May 12, 2020. Gunmen stormed a hospital on May 12 in an ongoing attack in the Afghan capital Kabul, a government official and a fleeing doctor said. Photograph:( AFP )

The death toll in two separate terror attacks in Afghanistan on Tuesday is now close to 40, with more than 75 people also injured, officials said.

Also read: Afghanistan jolted by a series of terror attacks

President Ashraf Ghani blamed both the Taliban and Islamic State for the carnage.

"Today, we witnessed terrorist attacks by the Taliban and Daesh groups on a hospital in Kabul and a funeral in Nangarhar, as well as other attacks in the country," Ghani said in a televised address, using the Arabic abbreviation for IS.

He ordered Afghanistan's security forces to end their "active defence position" and "return to offensive postures, and resume their operations against the enemy."

The move comes months after Afghan forces pledged to only react defensively to Taliban attacks to show good faith ahead of eventual peace talks.

The first terror attack was conducted on a 100-bed facility maternity hospital, took place in a Shia-populated area of Kabul and involved three gunmen.

More than 100 people were rescued during the hours-long attack on the hospital. The Dasht-e-Barchi area, where the hospital is located, is largely inhabited by the Shia Hazara community, which has been repeatedly targeted by Daesh.

The second strike was on a funeral procession for a local police chief which was taking place in a district of eastern Nangarhar province. It included lawmakers and provincial council members.

At least 26 people died and over 60 were injured in the suicide blast.

The attacker detonated his explosives in the middle of the ceremony, said Ataullah Khogyani, spokesman for the governor of Nangarhar province.