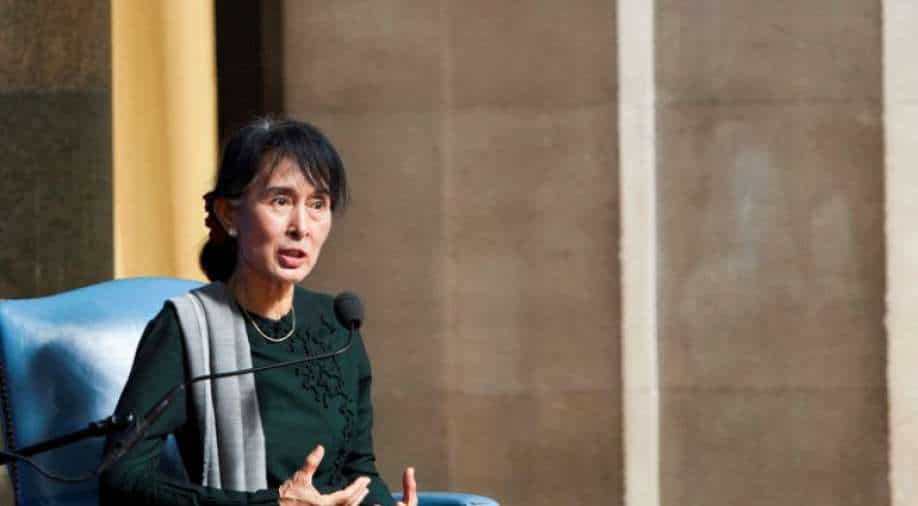 Suu Kyi personally presented Myanmar's arguments at the International Court of Justice (ICJ) when the case was first heard in December 2019, but was ousted as civilian leader in a military coup last year. Photograph:( Reuters )

Myanmar's junta is set to replace Aung San Suu Kyi at the UN's top court Monday as it seeks to dismiss a case over the alleged genocide of Rohingya Muslims.

Suu Kyi personally presented Myanmar's arguments at the International Court of Justice (ICJ) when the case was first heard in December 2019, but was ousted as civilian leader in a military coup last year.

The Nobel peace laureate, who faced criticism from rights groups for her involvement in the case, is now under house arrest and trial by the same generals she defended in The Hague.

In its "preliminary objections" on Monday, Myanmar will argue that the court has no jurisdiction over the case, and must throw it out before it moves on to substantive hearings.

Both have been hit with US sanctions over the coup.

The case brought by the mainly Muslim African nation of The Gambia accuses predominantly Buddhist Myanmar of genocide against the Rohingya minority over a bloody 2017 military crackdown.

The ICJ made a provisional order in January 2020 that Myanmar must take "all measures" to prevent the alleged genocide of the Rohingya while the years-long proceedings are underway.

Gambia will make its counter-arguments on Wednesday.

Around 850,000 Rohingya are languishing in camps in neighbouring Bangladesh while another 600,000 Rohingya remain in Myanmar's southwestern Rakhine state.

The ICJ was set up after World War II to rule on disputes between UN member states. Its judgments are binding but it has no real means to enforce them.

The Rohingya case at the ICJ has been complicated by the coup that ousted Suu Kyi and her civilian government, and triggered mass protests and a bloody military crackdown. More than 1,500 civilians have been killed, according to a local monitoring group.

Suu Kyi now faces trial herself in Myanmar on a raft of charges that could see her jailed for more than 150 years.

Ahead of the hearing, the shadow "National Unity Government" dominated by lawmakers from Suu Kyi’s ousted party said it, not the junta, "is the proper representative of Myanmar at the ICJ in the case".

It also rejects Myanmar’s preliminary objections, saying the hearings for these should be cancelled and the court should quickly get down to the hearing of the substantive case.

The NUG holds no territory and has not been recognised by any foreign government, and has been declared a "terrorist" organisation by the junta.

The Gambia accuses Myanmar of breaching the 1948 UN genocide convention.

Its case is backed by the 57-nation Organisation of Islamic Cooperation, Canada and the Netherlands.