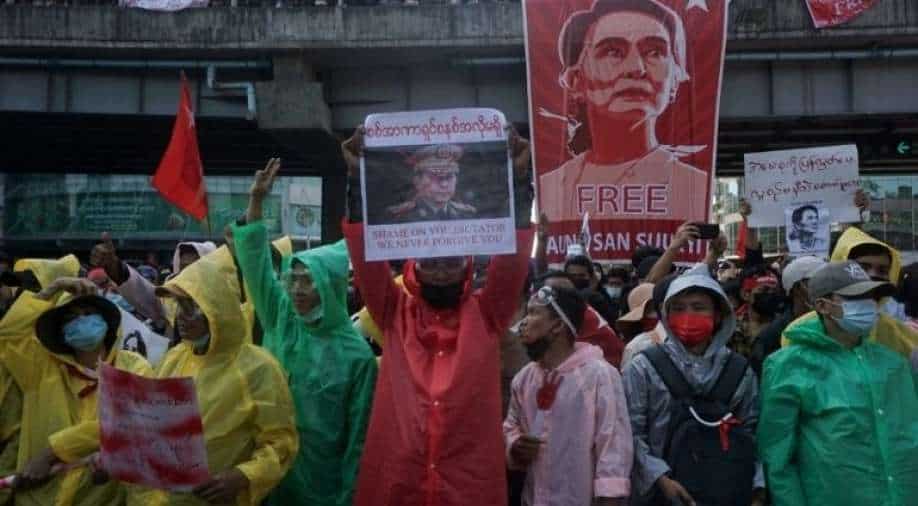 Protesters wear wet weather gear to protect against police water cannon as they take part in a demonstration against the military coup in Yangon. February 9, 2021. (File Photo) Photograph:( AFP )

According to a local monitoring group, more than 900 people have been killed since the generals' February putsch and subsequent crackdown on dissent

Myanmar protesters on Sunday marked the anniversary of a 1988 pro-democracy uprising that brought Aung San Suu Kyi to prominence, with flash mobs and marches of defiance against the ruling junta.

The country has been in turmoil since the generals launched their February putsch and subsequent crackdown on dissent that has killed more than 900 people, according to a local monitoring group.

But protesters remain undeterred, taking to the streets daily in lightning-quick rallies to demand the end to the State Administration Council -- as the junta's so-called "caretaker" government has dubbed itself.

On Sunday, flash mobs popped up across Yangon and second city Mandalay to commemorate the 1988 uprising -- a massive pro-democracy movement which the military violently quelled by opening fire on protesters and jailing thousands.

Following the calls of an online campaign, red-clad protesters on Sunday flashed an eight-finger salute and carried banners that read "Let's return the old blood debt of 1988 in 2021."

"In 1988, our country sacrificed a lot -- many people lost their lives. But the dictatorship is still alive," said Ko Sai Win, who joined a morning protest in Mandalay.

"It is like a black shadow on our country."

The 1988 uprising heralded the rise of Suu Kyi, who had returned to Myanmar just before protests kicked off to care for her ailing mother.

Thanks to her stature as the daughter of General Aung San, who fought for independence against the British, and her rousing speeches, Suu Kyi emerged as a pro-democracy icon, later receiving the Nobel Peace Prize.

A shadow "National Unity Government" -- formed largely of MPs from her ousted party -- vowed in a statement Sunday to continue the fight for democracy.

"The UK stood by the people of Myanmar in 1988 and we stand by them today in 2021," he said in a video posted on the British embassy's official Twitter.

Today we remember the 33rd anniversary of the #8888uprising in #Myanmar - a nationwide pro-democracy movement, which began 🇲🇲 transition from military rule to democracy.
Hear from our ambassador, @PeteVowles here. pic.twitter.com/bzzCZVHH1I

The junta has alleged widespread electoral fraud by Suu Kyi's NLD party to justify its power grab, and the Nobel laureate is facing an eclectic raft of charges including for the illegal possession of walkie-talkies and breaking coronavirus rules.