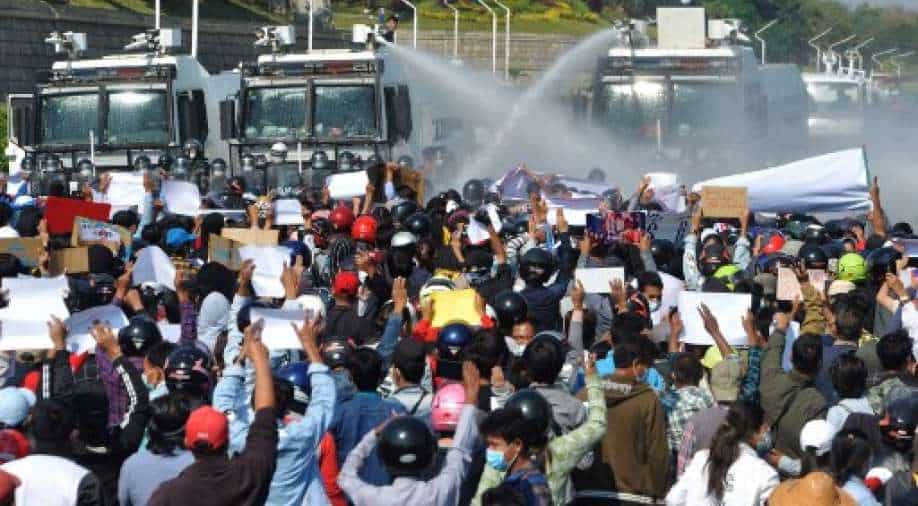 According to reports, in San Chaung teachers joined the protesters waving the three-finger salute which was the trademark during the Hong Kong protests.

Protesters in Myanmar took to the streets against the military coup for the fourth consecutive day as authorities used water cannons to quell the anti-coup rally.

The military had imposed martial law in the country after protesters intensified over the weekend. The authorities had imposed nighttime curfew and banned gatherings of more than five people in Yangon and other parts of the country.

Despite the restrictions, there were demonstrations even as there were no reports of Aung San Suu Kyi whereabouts. The military has detained several members of the Suu Kyi's National League for Democracy (NLD) party which the military claimed won the November elections due to voter fraud, a claim which has not been independently verified.

According to reports, in San Chaung teachers joined the protesters waving the three-finger salute which was the trademark during the Hong Kong protests.

Other towns including  Kamayut, Naypyidaw also witnessed anti-military protests over a week after the country's junta chief General Min Aung Hlaing seized power in a putsch. The military has imposed a one-year state of emergency.

The coup has been heavily criticised by the United States and other nations. New Zealand announced on Tuesday that it was suspending military and political contacts with Myanmar including travel bans on senior military figures as the coup continued to sour relations between the military and international governments.

"We do not recognise the legitimacy of the military-led government and we call on the military to immediately release all detained political leaders and restore civilian rule," New Zealand's foreign ministry said, while Prime Minister Jacinda Ardern added, "I think every New Zealander would be devastated to see what we've seen in recent days led by the military."

Amid the protests in the country, the UN Human Rights Council said it would will hold a special session on Friday to discuss the Myanmar crisis.