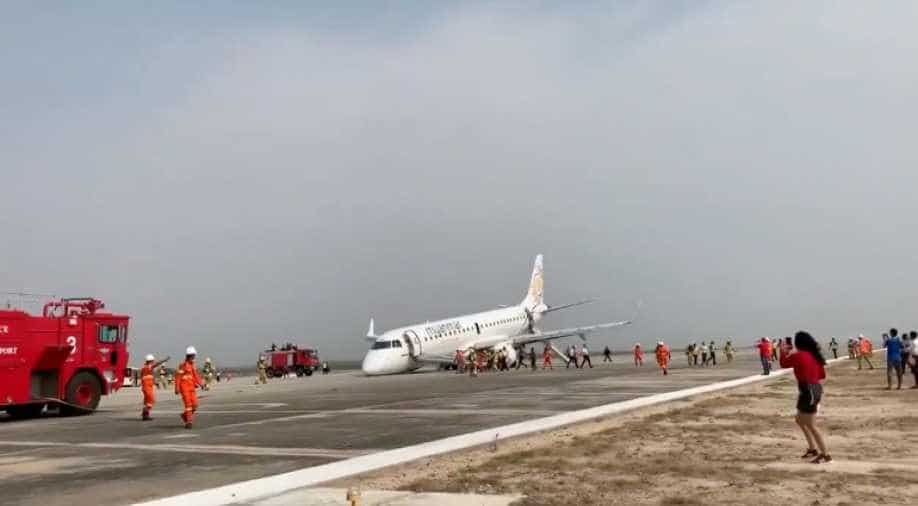 A passenger records the scene on her phone as firefighters attend to the scene after Myanmar National Airlines flight UB103 landed without a front wheel at Mandalay International Airport in Tada-U, Myanmar. Photograph:( Reuters )

The nailbiting touchdown -- in which nobody was injured -- was the second instance of a malfunctioning flight in less than a week within the country.

A Myanmar pilot saved the day after his aircraft's landing gear failed, forcing the jet into an emergency landing with no front wheels on Sunday morning, an official said.

The nailbiting touchdown -- in which nobody was injured -- was the second instance of a malfunctioning flight in less than a week within the country.

The Myanmar Airlines flight UB-103 -- an Embraer-190 model -- was grounded at around 9 am in Mandalay (0230 GMT), a city popular among foreign tourists, with all 89 people on board including seven crew members, safe.

An unverified video circulated on social media showing a graceful landing before the nose of the jet tipped over and ground to a halt.

Ye Htut Aung, deputy director general of Myanmar's Civil Aviation Department, told AFP the pilot tried repeatedly to drop the landing gear at the front of the plane -- first through its computer system, then manually.

"They tried hard twice by flying around twice and asked to check whether the nose wheel dropped or not," Ye Htut Aung said, calling it a "technical fault".

"So they had to land with the back wheels... The pilot could land it skillfully," he said. "There were no casualties."

Myanmar National Airlines is now sending engineers to Mandalay to check on the aircraft, Ye Htut Aung said, adding that all jets get a daily flight check.

Passenger Soe Moe told AFP: "Smoke came out a little when we landed... All passengers are okay."

Sunday's incident comes just days after a Biman Bangladesh Airlines plane crash-landed and slid off a runway while landing in Yangon airport during a storm on Wednesday, leaving 11 passengers injured.

Myanmar's monsoon season has caused problems for commercial and military flights in the past.

A military plane crashed into the Andaman sea in 2017 with 122 people on board -- one of the deadliest aviation accidents in the country's history -- which authorities attributed to bad weather.

And in 2015, a passenger plane by Air Bagan veered off the runway due to bad weather and heavy rain.