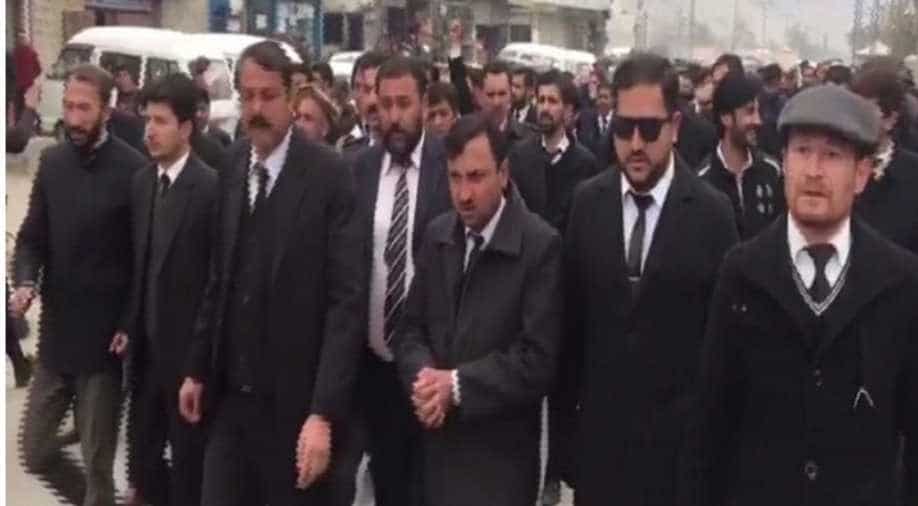 Terming it as a 'black' bill, the lawyers protested in front of the Chief Minister House and chant 'Rishtidari Bill Namanzoor' (Oppose the Bill which supports kinship).

Lawyers took to the streets in Gilgit city on Friday to protest against a controversial bill that allows relatives of the assembly members to assume jobs in the courts.

Terming it as a 'black' bill, the lawyers protested in front of the Chief Minister House and chant "Rishtidari Bill Namanzoor" (Oppose the Bill which supports kinship).

"We demand from Governor of Gilgit- Baltistan to condemn this 'Black' bill and should not allow it to pass as this bill is against the laws of Supreme Appellate Court in Gilgit-Baltistan and our rights. We will not accept any illegal bill passed by the assembly," said a protesting lawyer.

"On 4th of this month, the so-called assembly passed an unconstitutional bill. They had appointed their relatives on contract basis on the posts of DDPs, DAs and ADPs for six months but now it has been four years since when they have been extending the contracts of their relatives. As per the orders of Supreme Court, these positions were to be filled by the competent candidates who would qualify these competitive exams but unfortunately on 4th of this month a special lobby tabled a bill in the so-called assembly to appoint their relatives," another lawyer said.

"The illegal bill got passed in the assembly. It is the 'murder' of merit and violation of the rule of law. The lawyers registered contempt in the court. The lawyers called for a protest from 4th of this month and in around ten courts of Gilgit-Baltistan they are on a strike against this illegal bill," the lawyer added.

The disgruntled lawyers deemed the bill to be unconstitutional and deprive the competent candidates of their rights and jobs.

A third protesting lawyer said, "It has been a history in Gilgit- Baltistan to appoint incompetent persons through such illegal bills. Appointments have been continuing on similar lines which are illegal. We strictly condemn this bill".

The nepotism in the recruitment process for any government job in Gilgit-Baltistan has remained deep-rooted for decades.

The government of Pakistan has never allowed any policies or legislation to be formulated in the illegally occupied territory that could benefit the locals and bring development in the region.