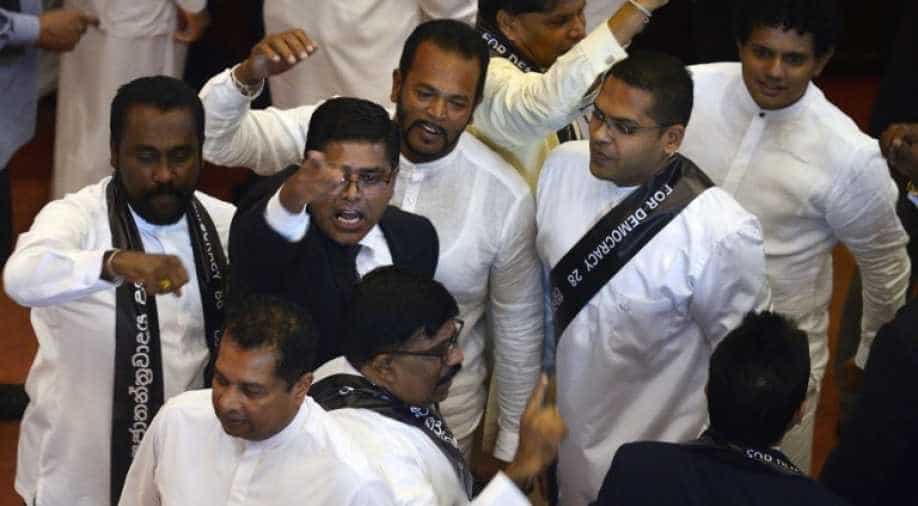 The decision came a day after an all-party meeting called by President Sirisena to resolve the crisis ended inconclusively.

The crisis erupted when President Sirisena suddenly announced on October 26 that he had sacked prime minister Wickremesinghe and installed ex-strongman Mahinda Rajapaksa in his place.

Sirisena later dissolved Parliament, almost 20 months before its term was to end, and ordered snap election. The Supreme Court on Tuesday overturned President Sirisena's decision to dissolve Parliament and halted the preparations for snap polls on January 5.

The House till now has passed two no-confidence motions against Rajapaksa and his government by a voice vote.

The House was convened Monday morning to conduct a third floor test. Ten minutes later, the House was adjourned till November 23.

When the House was convened, Deputy Speaker Ananda Kumarasiri said the party leaders who met in earlier in the day resolved that a select committee would be appointed to conduct the parliamentary business.

The leaders from Wickremesinghe's United National Front, Tamil National Alliance and the JVP or the People's Liberation Front discussed the proposal by Sirisena made at the all party meeting to have a floor test by name or electronic vote for the third motion of no trust against Rajapaksa.

Mano Ganesan, one of the leaders who attended the meeting, said the United People's Freedom Alliance (UPFA of Sirisena and Rajapaksa) "flatly refused and backtracked" on the proposal.

During Monday's session, Dinesh Gunawardena on behalf of the disputed government of Rajapaksa asked the deputy speaker that since they were the government they should have the majority in the select committee.

JVP leader Anura Kumara Dissanayake argued that since the Rajapaksa government had not proved their majority the select committee should have a majority of members from the group that commands majority.

On Monday, the public and VIP gallery were shut for diplomats on a request by Rajapaksa's United People's Freedom Alliance (UPFA). The security was also tightened to prevent any incident, officials said.

Last week, the apex court issued a temporary order against Sirisena's sacking of parliament with hearing of the case fixed for early December.

After the temporary order, Speaker Karu Jayasuriya reconvened parliament the sittings of which had been suspended by Sirisena till November 14.

Jayasuriya's decision not to recognise Rajapaksa as the prime minister until a floor test is held has angered Sirisena.