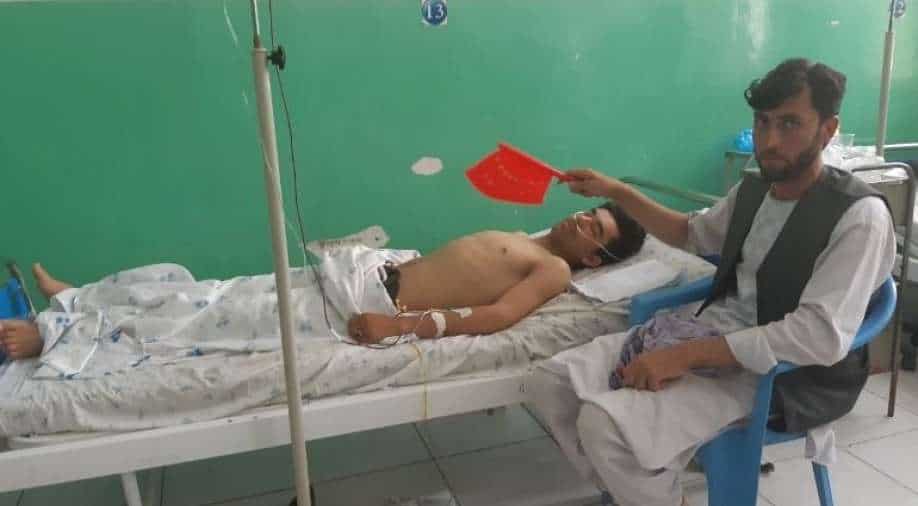 Baghlan has seen fierce fighting in recent months, with near-daily battles between the Taliban and government forces in several districts

The Islamic State group on Wednesday claimed responsibility for a deadly attack on a compound housing workers from the HALO Trust de-mining group, after the Britain-based charity contradicted a government report and said the Taliban weren't to blame.

The SITE intelligence monitoring group cited an IS statement as claiming its fighters killed or wounded more than 60 "demining workers". So far, the official death toll is 10.

Masked gunmen killed 10 people working for the HALO Trust mine-clearing organisation in northern Afghanistan in an attack the government blamed on the Taliban Wednesday, but the Britain-based charity said the insurgents actually helped end the assault.

The raid happened late on Tuesday as dozens of deminers were relaxing at a HALO compound in Baghlan province, around 260 kilometres (160 miles) north of the capital Kabul after a day spent looking for ordnance in the area.

Baghlan has seen fierce fighting in recent months, with near-daily battles between the Taliban and government forces in several districts.

A survivor of Tuesday's attack told AFP that five or six armed men scaled the compound walls and gathered everyone together before asking if there were any Hazara present.

Afghanistan's Shiite Hazara community is often targeted by jihadists from the Islamic State group, who consider them heretics. The SITE Monitoring website reported Wednesday that IS had claimed responsibility for the attack.

"Nobody responded," said the survivor, who asked not to be identified.

He told AFP the gunmen then asked the compound leader to identify himself, before shooting him dead.

"As they opened fire, we all tried to escape. Some were killed and some, like me, were wounded."

'Taliban scared off the assailants'

Before the IS claim, Afghan Vice President Amrullah Saleh blamed the Taliban for the attack, saying in a tweet the insurgents wanted to "steal money and unexploded devices" from the HALO base.

Also read | US pullout from Afghanistan half done, but questions remain

"This is a horrific incident, the worst in the HALO Trust's history," he said.

The Taliban dismissed the government's accusation that they were behind the attack -- and Cowen also said the insurgents were not responsible.

"The Taliban have denied responsibility for this and indeed the local Talib group came to our aid and scared off the assailants," he said, adding his organisation was unaware who the attackers were.

The Taliban said they were not to blame.

"We condemn attacks on the defenseless & view it as brutality," spokesman Zabihullah Mujahid said on Twitter.

"We have normal relations with NGOs, our Mujahideen will never carry out such brutal acts."

Also read | US had constructive discussions with Pak on Afghanistan issue: Sullivan

Violence has surged across the country since May 1 when the US military began its final troop withdrawal amid a deadlock in peace talks between the Afghan government and the Taliban.

In several districts where fighting has been intense in recent months, the insurgents have planted roadside bombs and mines to target government forces, but the explosives often kill and wound civilians.

Afghanistan was already one of the most heavily mined countries in the world, a legacy of decades of conflict.

The HALO Trust was founded in 1988 specifically to tackle ordnance left following the nearly 10-year Soviet occupation, and became a favourite cause of Britain's Princess Diana.

The organisation's website says it has an Afghan workforce of more than 2,600 and has removed landmines from nearly 80 percent of the country's recorded minefields and battlefields.

The United Nations Resident Humanitarian Coordinator for Afghanistan, Ramiz Alakbarov, condemned what he said was a "heinous attack" on HALO workers.

"It is repugnant that an organisation that works to clear landmines and other explosives and better the lives of vulnerable people could be targeted," he said in a statement.

On Wednesday, the Taliban claimed it had shot down an Afghan military helicopter in the province of Wardak near Kabul, but the defence ministry said the aircraft had crashed due to "technical reasons".

Three crew members were killed in the incident, the ministry said.