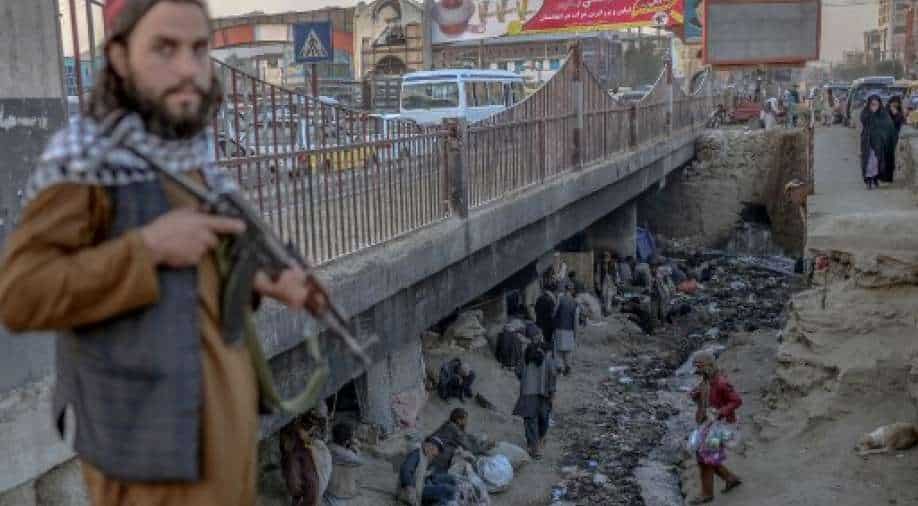 A Taliban member standing guard next to a bridge where hundreds of addicted people gather in Kabul Photograph:( AFP )

Only five per cent of Afghan households reported having “enough food to eat”, according to a recent World Food Programme survey

On a busy street of Taimani, in the northwest of Kabul, one could see plenty of fruit sellers lined up along the streets. Just as one drives up along this street, a fruit seller, who wasn’t in this business until two weeks ago, stands out.

Nazar Mohammed was an assistant professor at the Kabul university at the Faculty of Fine Arts. He graduated from the Kazakh College of Fine Arts in Kazakhstan.

Afghanistan’s dire economic condition has forced him to sell bananas on the streets. Nazar, a father of two, lives in a joint family of 12. He is not accustomed to selling bananas, but he believes that this time won’t last forever.

Nazar is among the many teachers who continue to remain unpaid in Afghanistan for months now.

Also read | ‘Completely lost’: For some Afghans, returning home is as difficult as fleeing

The story of Nazar is one among many who scramble to make a living in the war-torn Afghanistan region, whose economy has taken a massive hit following Taliban takeover of Kabul and the resultant ouster of the civilian government.

Only five per cent of Afghan households reported having “enough food to eat”, according to a recent World Food Programme survey.

In Kabul’s Bibi Mahro area, it's 9 am as Ahsan, who used to be a teaching assistant at a private university, leaves his house. However, instead of going to a teaching institute, as his profession warrants, he goes to a busy street of the city centre called Sheher e Nau, where he is now washing cars to run his family.

Ahsan says it’s difficult for him to make a living, he now earns 10 times lesser than what he used to. Ahsan believes that under the Taliban rule, there might be peace, but there is no place for professionals.

In August, the Taliban overthrew the US-backed regime and declared an interim government, vowing to restore stability.

But the Taliban still face a range of international sanctions and a campaign of bloody attacks by the Daesh (ISIS) terrorist group – while climate change has made Afghanistan’s droughts more frequent and intense.

By early next year, it is projected that 97 per cent of the population in Afghanistan will be below the poverty line.

With the Taliban continuously insisting and requesting skilled professionals to stay in the country, as the nation continues to face an acute shortage of cash and other essentials, the treatment rendered out to educators would need more than just statements to hold them back as they strive to earn with dignity and hard work.