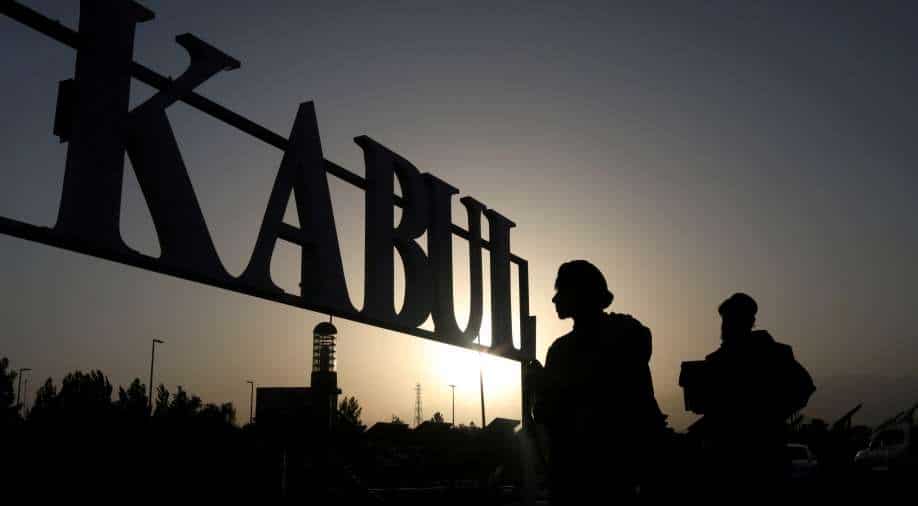 (File photo) Taliban soldiers stand in front of a sign at the international airport in Kabul Photograph:( Reuters )

Among the group were parents separated from young children for nearly two months, grown children separated from dying parents. There were newborn babies, stateless at birth

The Afghans stranded in India held protests, went from office to office and pleaded with relatives around the world to chip in for plane tickets. There was only one flight available to take them back home, to a country that had fallen to the Taliban since they had left it.

None of them had any doubts about what awaited them in Afghanistan: economic hardship, the loss of basic liberties and even the possibility of persecution. But ties to home can’t always be explained away with the cold logic of risk calculation. Home, no matter how much it is burning or broken, evokes compulsions that can pull you in even as thousands are desperately trying to leave.

Among those on the manifest for the flight from Delhi to Kabul earlier this month were cancer patients who had run out of money for treatment and wanted to be on their own soil if death came. They had seen how complicated it was to transport, across the borders of a bitterly divided region, the bodies of those who died in one country but wished to be buried in another.

Among the group were parents separated from young children for nearly two months, grown children separated from dying parents. There were newborn babies, stateless at birth.

“My father is in a wheelchair in Kabul,” said Mohamed Yasin Noori, an employee of the former government, before getting on the flight operated by Iran’s Mahan Air that would transit through Tehran to arrive in Afghanistan. “My worry of being separated from him will end. But then I walk into another worry: What happens next?”

Noori had arrived in India with his sister, a breast-cancer patient, just five days before Kabul fell on Aug. 15 to the Taliban. Despite their rush to complete her tests and physiotherapy and get back home to Noori’s father, they still couldn’t beat the pace of things that were unraveling at home.

“If he had been with us here, I wouldn’t have gone back,” Noori said of his father.

Much of the work to get the stranded Afghans back home is being carried out by the Afghan Embassy in New Delhi. The old government’s flag flies over the ghostly compound, and portraits of the former leaders hang on the walls.

Farid Mamundzay, the ambassador who lost his government just six months into the job, said that about 150,000 Afghans are in India in all, including minority Hindus and Sikhs who had relocated following terrorist threats, and about 15,000 university students. About 2,000 of the Afghans have expressed a desperate need to return home, while thousands of others need new passports he cannot provide.

“Being stateless makes you, diplomatically, a valueless mission,” Mamundzay said of his embassy.

The ambassador said his staff members, who had shifted to operating a “humanitarian relief and consular services mission,” had gone unpaid for months, surviving on the remaining cash in the embassy split among them. One of the main factors motivating staff members to stay was the ambassador’s promise to seek places for their families to resettle. But Mamundzay was unsure if he could keep the doors open longer than a few months.

“It would be a great injustice to these people if we shut the mission and abandoned them in foreign lands,” Mamundzay said.

The 106 Afghans who made it on the first flight home were not only the most urgent cases but also the people who could afford an $850 ticket. There have been three flights so far, taking 350 people back.

The embassy’s biggest challenge now is what to do with those who can’t afford plane tickets but keep knocking at the mission’s door.

Most of the stranded Afghans rent small rooms in a refugee area called Lajpat Nagar; many of them ran out of money weeks ago and are unable to pay the meager rent.

“The landlord says he will take away my passport,” said Khan Mohammed, an Afghan police officer, who had arrived in Delhi weeks before the Taliban took over. “I told him that won’t get you any money — you should take my life instead because I am tired of it.”

After a stint as a contractor with the U.S. military and a failed attempt at the migrant trail to Europe, Mohammed joined the police about five years ago for a monthly salary of about $200. Within a year, he found himself in the middle of a Taliban ambush.

The war left him with a missing jaw, and more than $30,000 in medical bills over four years trying to fix it.

“I am completely lost,” said Mohammed, who said twice he had tried to kill himself.

Drawing on her savings as a cook of 20 years for the local U.N. office in northern Afghanistan, Tahera Noori had come to Delhi hoping to treat her own heart problem, a grandchild’s paralyzed legs and a second grandchild’s bleeding ear.

The doctors in Delhi gave her another diagnosis: She had ovarian cancer. Destitute and facing eviction, her daughter gave birth to her third child.

Noori told the embassy officials there was no way she, and hundreds of others like her, could afford the airfare. She begged them to take her and her family back to Afghanistan by road, through India’s high-security border with Pakistan.

“I will go by the Pakistani border even if they shoot me,” Noori pleaded.

Pakistan had initially showed willingness to process transit visas for 25 Afghans each week, but that number has shrunk to just a few in recent weeks, the Afghan ambassador said. An official at Pakistan’s mission in New Delhi said they had given transit visas to about 50 Afghans since the fall of Kabul, and that they were continuing to process other requests on case-by-cases basis.

For some, the transit denied in life came only after death.

When their mother died of a respiratory disease at a hospital in Delhi, Maryam and her brother spent two weeks shuttling between the Pakistani mission to ask for visas, the Indian government to seek clearances and the Afghan Embassy to help push those requests through.

At night, the siblings survived on instant noodles and slept in a cramped room. During the day, they went to the morgue to plead for extensions to keep the body of their mother there.

The family’s trip to India was meant to be a happy moment for the mother and daughter.

Maryam, once a child bride, was drawing on the earnings of her new job as a lawyer — and savings from the sale of pine nuts — to pay for treatment for her mother, whose suffering had begun long before her bouts of tuberculosis and COVID-19. Like her daughter, she had also been a child bride who lost her first husband to the war while pregnant.

Maryam once worked as an office cleaner during the day, raised three children and took evening literacy classes to finish high school. After graduating with a law degree six months ago, she had gotten a job defending victims of abuse in one of the most conservative parts of southeastern Afghanistan.

When Kabul fell, Maryam thought about sending her mother and brother home while she stayed behind to explore asylum options. She had faced threats because of her job even before the Taliban; one colleague was assassinated outside the apartment building where they all lived.

“If I go back, I know I may be going back to my own death,” said Maryam, who is being identified by first name only to protect her identity.

But when her mother died on Sept. 26, Maryam had only one choice: Take her remains home, no matter what.

Late one evening last week, the siblings loaded their mother onto a rented ambulance, washed her body at a funeral home and drove all night to reach India’s border with Pakistan. From there, it took another two days of travel — transferring between three ambulances, more paperwork and the crossing of another border — before she was laid to rest in southeastern Afghanistan.

If there was any solace for Maryam, it was that their ordeal in India was over — that their mother would reach her eternal rest and that Maryam would reunite with her own young children.

“My youngest daughter is sick after me,” Maryam said before they left. “Every day, she counts the planes in the sky.”