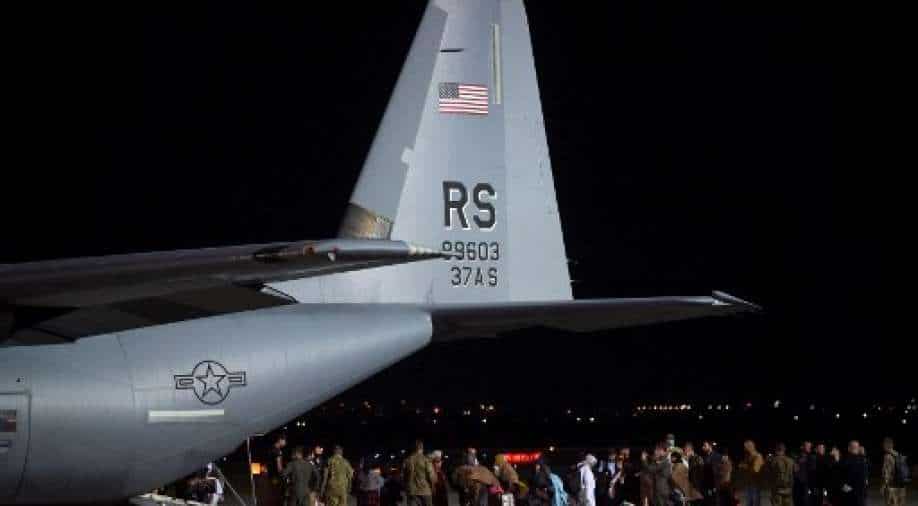 Afghan refugees exit a US Air Force plane upon their arrival at Pristina International airport in Kosovo Photograph:( AFP )

Amid the rocket attacks on the Kabul airport, the US has reportedly evacuated 114,400 people including "at-risk" Afghans even as the US administration said the Taliban has assured safe passage for Americans and legal permanent residents

Amid the rocket attack on Kabul airport on Monday, the US continued its evacuation operation at the Hamid Karzai international airport.

Reports said the Taliban has assured a hundred countries that all foreign nationals and any Afghan citizen with travel authorisation will be allowed to leave the country.

The countries said it "citizens, nationals and residents, employees, Afghans who have worked with us and those who are at risk can continue to travel freely to destinations outside Afghanistan."

The US has reportedly evacuated 114,400 people, including foreign nationals and "at-risk" Afghans with the number of US troops at the airport reported to be below 4,000 over the weekend.

Jake Sullivan, US President Joe Biden's national security adviser had said that the US administration will make sure "after August 31 "safe passage" is provided for any "American citizen, any legal permanent resident".

Sullivan had said the Taliban had assured the Biden administration "privately and publicly" that it would provide "safe passage" to people required by the US government.

The development comes as the US chases a stiff deadline with just hours left for the evacuation operation to be completed. President Joe Biden had earlier declared August 31 to be the final date for the departure of all US personnel from the country.

On Monday rockets were fired at Kabul airport as reports said it was intercepted by the US defence system. At least 5 rockets were reportedly fired at the airport by militants.

President Biden on Sunday had warned of another terrorist attack within the "next 24-36 hours" as the US conducted a drone strike on a suspected explosive-laden vehicle in Kabul.