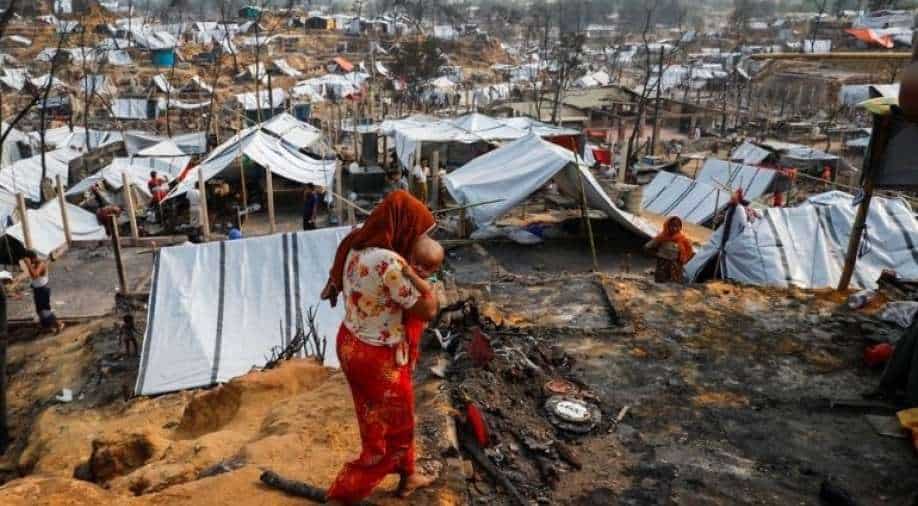 Rohingya are refusing to go back until they are assured of security and equal rights. The refugees remain stuck in bamboo-and-tarp shacks with no work, poor sanitation and little education for their children

Bloodstains still mark the spot where assassins gunned down Mohib Ullah, an activist who was a leading voice for the 850,000 Rohingya living in fear in Bangladeshi refugee camps.

In the weeks since the murder, a senior member of the now-shellshocked volunteer group that Ullah headed has received phone calls telling him he'll be next. And he's not alone.

Also Read | About 37,000 people displaced in Myanmar's northwest, many have fled into India

"They can hunt you down the way they have brazenly shot dead our leader and so many people," Noor, too frightened to give his real name or be filmed, told AFP.

"They", he believes, are members of the Arakan Rohingya Salvation Army (ARSA), an insurgent group fighting the Myanmar military but also thought to be behind a wave of killings and criminal activity in the camps.

ARSA has denied it killed Ullah.

Most of the Rohingya have been in the camps since 2017 when they fled a brutal military offensive in Buddhist-majority Myanmar, where the predominantly Muslim minority are reviled and seen as illegal immigrants.

Refusing to go back until they are assured of security and equal rights, the refugees remain stuck in bamboo-and-tarp shacks with no work, poor sanitation and little education for their children.

Overflowing latrines fill narrow mud lanes with excrement in monsoon season, and fires can rip through the flimsy homes in minutes during the hot summers.

By day the Bangladesh authorities provide some security. But at night the camps become the domain of gangs -- allegedly linked to ARSA -- that traffic millions of dollars worth of methamphetamine from Myanmar.

"The scenario is different as soon as the sun sets," Israfil, a Rohingya refugee who goes by one name, told AFP.

"The dark time is the long hours when they do whatever they want to do," he added.

Working among the chaos and unease in the camps, Ullah and his colleagues quietly documented the crimes that his people suffered at the hands of the Myanmar military, while pressing for better conditions.

The former schoolteacher shot to prominence in 2019 when he organised a protest of around 100,000 people in the camps to mark two years since their exodus.

That year he met US President Donald Trump in the White House and addressed a UN meeting in Geneva.

But his fame appears to have gone down badly with ARSA.

They saw Ullah as threatening their place as the sole voice representing the Rohingya -- one who was opposed to their violence, his colleagues and rights activists say.

"He became a thorn in ARSA's side," said Nur Khan Liton, a top rights activist in Bangladesh.

"ARSA was also frightened by his enormous popularity."

Three weeks after Ullah's murder in late September, gunmen and machete-wielding attackers slaughtered seven people in an Islamic seminary that had allegedly refused to pay protection money to ARSA.

"The brutal carnage bore all the marks of ARSA. The group previously slaughtered at least two top Islamic clerics because they didn't back ARSA's violent struggle," said a top expatriate Rohingya activist.

"ARSA has carried out the murders to establish its full control in the camps. After the latest carnage, everyone seems to be silenced," he added, asking to remain anonymous.

After the attack on the seminary, the UN refugee agency urged the Bangladesh authorities "to take immediate measures to improve the security in the refugee camps".

A series of turf war killings in 2019 prompted the Bangladesh army to erect barbed-wire fences around the camps. The elite Armed Police Battalion was tasked with patrolling the area.

Police have also carried out a series of security operations that have killed dozens of alleged Rohingya drug traffickers.

But although they have arrested dozens of people over Ullah's killing, they are in denial about ARSA's activity, blaming instead "rivalries" in the camps.

"ARSA has no presence in the camps," Naimul Haque, the commanding officer of the Kutupalong camp, insisted to AFP.

Members of Ullah's group are far from reassured, saying that their security concerns fall on deaf ears.

Some even mutter that ARSA and the Bangladesh security forces are in cahoots -- something Dhaka vehemently denies.

Kyaw Min, a top Rohingya leader, said police assist ARSA to "reign" at night by "conveniently" not being around when they operate.

A month before he died Ullah sent a letter, seen by AFP but which could not be independently verified, to the Bangladesh authorities.

He named 70 men in the camps he said were ARSA members, and said he and his colleagues feared for their lives.

Family members of senior Rohingya leaders told AFP that Bangladesh security forces have since relocated at least six families including Ullah's, fearing they will be targeted.

"We thought we would be safe in Bangladesh. But now we don't know when the killers will knock on our doors," activist Sa Phyo Thida told AFP.

"Just like those genocide days in Myanmar in 2017 when we were living in fear of the military death squad, we now live in extreme fear.