'Information combat': Inside the fight for Myanmar's soul. The army's parallel fight online. 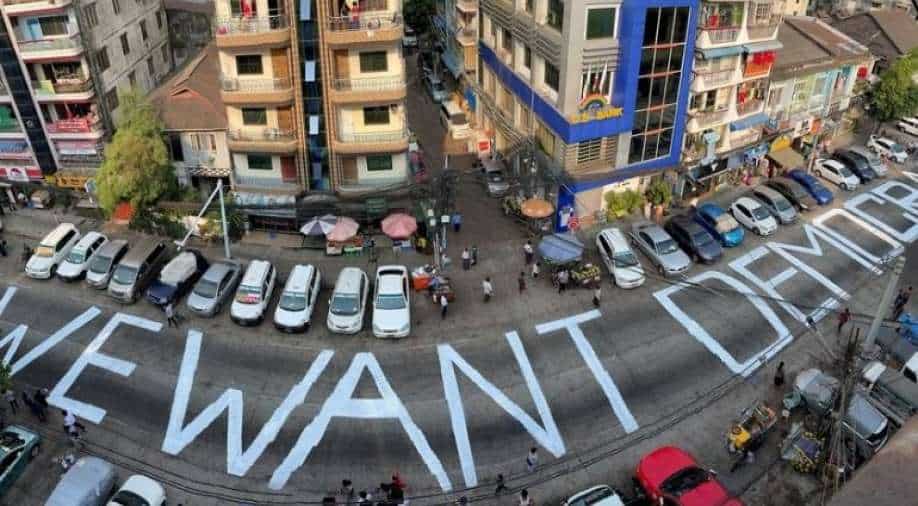 A slogan is written on a street as a protest after the coup in Yangon Photograph:( Reuters )

The mission of the social media drive, part of the military's broader propaganda operations, is to spread the junta's view among the population, as well as to monitor dissenters and attack them online as traitors

As Myanmar's military seeks to put down protest on the streets, a parallel battle is playing out on social media, with the junta using fake accounts to denounce opponents and press its message that it seized power to save the nation from election fraud, eight people with knowledge of the tactics said.

The army, which was banned by the country's dominant online platform Facebook after the February 1 coup, has tasked thousands of soldiers with conducting what is widely referred to in the military as "information combat", according to the people, who include four military sources.

The mission of the social media drive, part of the military's broader propaganda operations, is to spread the junta's view among the population, as well as to monitor dissenters and attack them online as traitors, the people told Reuters.

"Soldiers are asked to create several fake accounts and are given content segments and talking points that they have to post," said Captain Nyi Thuta, who defected from the army to join rebel forces at the end of February. "They also monitor activity online and join (anti-coup) online groups to track them."

The 31-year-old said he was part of the army's propaganda operations until his defection, writing speeches for military chief Min Aung Hlaing.

A spokesperson for the military government did not respond to repeated requests for comment on its social media tactics. In September, a junta spokesperson on army-owned Myawaddy TV accused media groups and opposition activists of spreading "fake news" about the situation in Myanmar.

The eight people with knowledge of the social media drive all asked to remain anonymous, citing fears of retaliation, with the exception of Nyi Thuta and Captain Lin Htet Aung, who defected from the army in April.

The military, known as the Tatmadaw, is pushing its campaign online even as it puts down protests on the streets, nine months after it ousted civilian leader Aung San Suu Kyi, saying her National League for Democracy had fraudulently won the November 2020 vote. International election watchdogs said in a May report that the vote was fair.

A Reuters review of thousands of social media posts in 2021 found that about 200 military personnel, using their personal accounts on platforms including Facebook, YouTube, TikTok, Twitter and Telegram, regularly posted messages or videos alleging fraud at the election and denouncing anti-coup protesters as traitors.

In over 100 cases, the messages or videos were duplicated across dozens of copycat accounts within minutes, as well as on online groups, purported fan channels for Myanmar celebrities and sports teams and purported news outlets, data from Facebook-owned online tracking tool Crowdtangle showed.

Posts often referred to people who opposed the junta as "enemies of the state" and "terrorists", and variously said they wanted to destroy the army, the country and the Buddhist religion.

Many opposition activists are using some similar methods, creating duplicate accounts to fill "Twitter teams" with hundreds of thousands of members and making anti-junta hashtags trend, according to the review and four activist sources.

While such tactics are common worldwide, they can be particularly influential in Myanmar, according to four researchers interviewed by Reuters who said the population receives most of its information via social media rather than directly from established news outlets, and Facebook is regularly used by over half the population.

The Tatmadaw has killed more than 1,000 civilians and jailed thousands since the coup, according to the United Nations, though the army says these estimates are exaggerated and that soldiers have also been killed by rebel forces.

"Our ban of the Tatmadaw and repeated disruption of coordinated inauthentic behavior has made it harder for people to misuse our services to cause harm," he added, responding to questions on the army's continued use of fake accounts.

"This is a highly adversarial issue and we are working hard to calibrate our systems to properly enforce the ban at scale."

Facebook says it has taken down hundreds of accounts and pages linked to Myanmar army personnel since 2018 after the New York Times reported that military officials were behind fake pages inciting violence against the Muslim Rohingya minority, 700,000 fled an army crackdown in 2017, and a Reuters investigation found Facebook was failing to police anti-Rohingya hate speech.

YouTube said it had "terminated" two pro-military channels posing as news outlets flagged by Reuters and that it was monitoring for "violative" content, while TikTok said it had "aggressively removed" thousands of Myanmar accounts that breached its guidelines.

Twitter said it remained vigilant against attempted manipulation. Telegram did not respond to a request for comment.

The information combat drive is being coordinated from the capital Naypyidaw by the army's Public Relations and Information Production Unit, known under the acronym Ka Ka Com, which has hundreds of soldiers there, said Nyi Thuta and Lin Htet Aung.

"Ka Ka Com gives a person's information to military intelligence if they believe they should be arrested or subject to on the ground surveillance," said Lin Htet Aung.

The central unit coordinates the work of dozens of smaller social media teams deployed across the country at regional military commands and battalions, according to the defectors.

The military has imposed some temporary restrictions on the internet since the coup and banned the use of Facebook in February yet 20 million people in the country continued to use the platform in July, according to Facebook data. That figure compares with 28 million in January, with many users getting around the ban by using virtual private networks (VPNs), according to researchers.

Watch | No end in sight to the bloody turmoil in Myanmar

Nyi Thuta and Lin Htet Aung said those monitoring for signs of trouble were particularly vigilant for any dissent among other soldiers to prevent defections. They said "monitoring teams" were often staffed in part by female soldiers, who are not allowed combat roles.

Both ahead of the election and after the coup, soldiers and their families were told to report their social media accounts to the army and warned not to post content critical of the junta or supportive of Aung San Suu Kyi, according to the two defectors plus another military source.

Nyi Thuta said he and other soldiers who did leave the army had been the targets of online attacks.
Reuters reviewed two Telegram groups with thousands of soldiers in them, who shared the identities, photos and social media details of people they said they suspected of being "watermelons", pro-military on the outside but secretly supportive of Aung San Suu Kyi, whose party's colours are red.

Both Lin Htet Aung and Nyi Thuta said they left the army of their own accord in protest at the coup. Lin Htet Aung now helps to train rebel forces in Myanmar.

Nyi Thuta, who declined to specify his location, said he had launched an online support organization for military personnel who wanted to defect, called People's Soldiers. The group, which has over a quarter of a million followers on Facebook, estimates that 2,000 soldiers have defected since the coup, a figure that Reuters was unable to confirm.

"I'm using the information warfare tactics I learned in the army against them," he said.