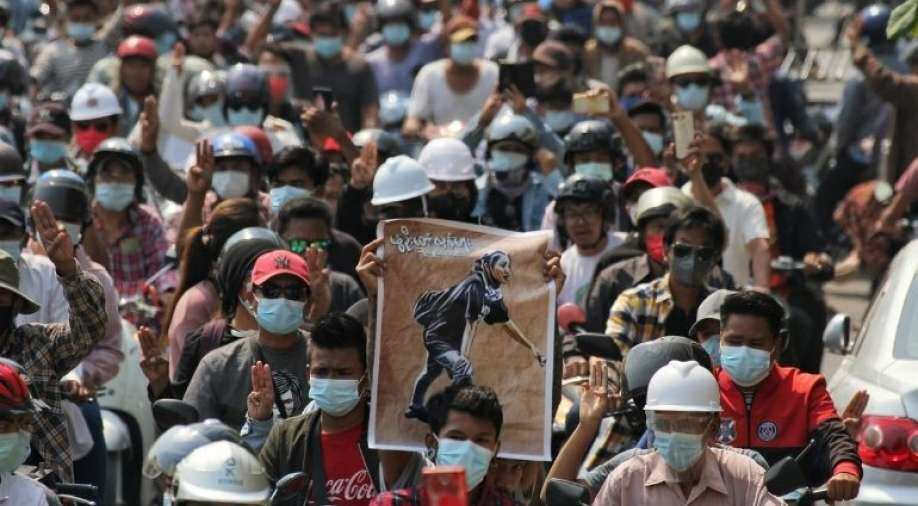 People attend the funeral of Angel, a 19-year-old protester also known as Kyal Sin, who was shot in the head as Myanmar forces opened fire to disperse an anti-coup demonstration in Mandalay, Myanmar. Photograph:( Reuters )

The exhumation of Kyal Sin has brought fresh outrage from opponents of the coup, who accuse the junta of trying to conceal the fact she was killed by their forces

Myanmar authorities exhumed the body of a 19-year-old woman, who was shot dead wearing a T-shirt that read 'Everything will be OK' and their examination exonerated police from the killing, state television MRTV said on Saturday.

Kyal Sin, widely known as Angel, died on Wednesday from a shot to the head as protesters came under fire from security forces trying to end demonstrations against the February 1 coup. She has become an icon of the protest movement.

The exhumation of Kyal Sin has brought fresh outrage from opponents of the coup, who accuse the junta of trying to conceal the fact she was killed by their forces.

State television said police, a judge and doctors had exhumed the body and carried out a surgical investigation.

They found a penetration wound in the back of the head and a piece of lead measuring 1.2 cm by 0.7 cm in the brain and said that it was different from the tips of bullets used by the police.

State television said police had been face-to-face with the protesters and the wound was at the back of the head and that the object which killed Kyal Sin could be fired from a gun able to shoot .38 calibre bullets.

"Therefore, it can be assumed that those who do not want stability conducted the assassination," MRTV said.

On social media, coup opponents described the exhumation as a further insult to Kyal Sin and her family, with the intention of giving a false account of what happened.

A military spokesman did not answer calls seeking comment.

State television said authorities had asked for the family's permission to exhume the body, but did not say whether it was granted.

Protesters at the scene of the demonstration in Mandalay on Wednesday said they had come under fire from live bullets at the time Kyal Sin was killed.

Kyal Sin had the back of her head turned towards the line of security forces in the moments before she was killed.

Residents said Kyal Sin's body had been exhumed on Friday by a team who arrived under police and military guard and kept people away from the grave site. The tomb was sealed with fresh cement and discarded rubber boots and gloves and plastic surgical gowns littered the site on Saturday.