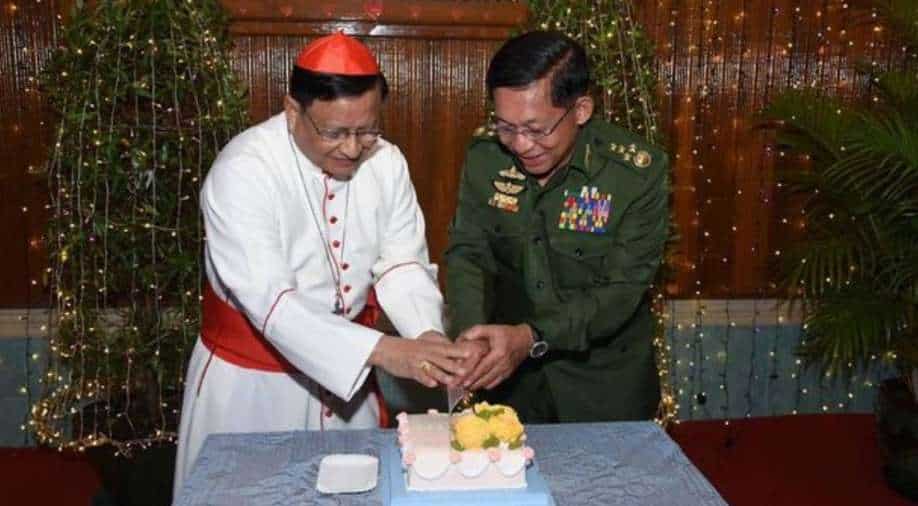 The photos have angered citizens, who are protesting against the military junta. (Image credit: @The_Melvis). Photograph:( Twitter )

Myanmar has been in turmoil since the military ousted Aung San Suu Kyi's government, this year in February

Photos of Myanmar's top Catholic prelate, Cardinal Charles Bo, with the country's junta chief Min Aung Hlaing sparked outrage after he was seen cutting a cake with coup leader amid a deadly military crackdown in the country.

State-backed Global New Light of Myanmar newspaper reported that Cardinal Charles Bo met the junta chief on Thursday (December 23) to hear Christmas carols. The meeting was also intended to "talk about peaceful and prosperous affairs" in the country.

In one of the photos published by the state media, they can be seen sitting together in front of a Christmas tree. Another photo showed that they were cutting the cake. Meanwhile, in one photo, Min Aung Hlaing was spotted handing over a donation of $11,200.

Bo was ordained a Cardinal by Pope Francis in 2015.

The photos have angered the pro-democratic citizens and social media users. People in Myanmar are protesting ever since Aung San Suu Kyi's civilian government was ousted by the military junta.

In the aftermath, more than 1,300 people have been dead after Junta opposed the protests with a brutal crackdown. Hundreds are injured, thousands arrested if reports by a local monitor are to be believed. There's no certainty over how the prisoners are being treated.

After the photos were circulated, some social media users have reacted sharply. One user posted on social media beneath a report on their meeting: "When Christians churches are being burned, even then he [Bo] accepts to meet him [Min Aung Hlaing]."

"People shouldn't go and pray where he lives. This doesn't represent Catholic people. Why are you cutting cakes with such a murderer?" another wrote.

Christmas Greetings on the occasion of the visit of Senior General Min Aung Hlaing;

"Christmas is the season of God's reconciling love with human beings"(John 3:16) pic.twitter.com/Z5Cll9q6NB

Where is the dignity of Jesus? ✝
Mr.Cardinal, are you happy with the killer #MyanmarMilitaryTerrorist ? Do you not think that such conduct would bring disgrace to the Christian Congregation? What is happening in the world? Is the world without humanity and compassion?

Myanmar has been in turmoil since the military ousted Aung San Suu Kyi's government, this year in February. Anti-coup militia have sprung up across the country to fight back against the junta, with some of the bloodiest fighting happening in Christian-majority areas.

The United States said in October it was "gravely concerned" about reports that security forces had committed human rights violations and destroyed more than 100 homes as well as churches in majority-Christian Chin state.