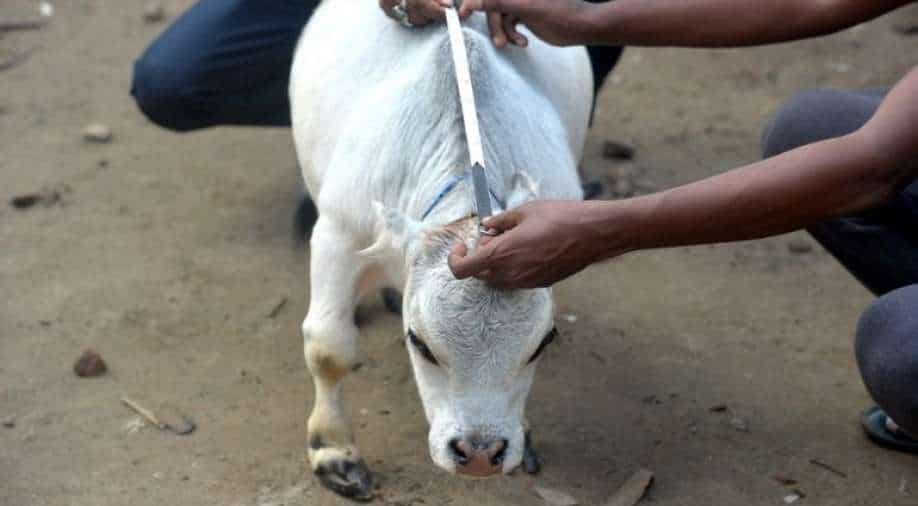 People measure a dwarf cow named Rani, whose owners applied to the Guinness Book of Records claiming it to be the smallest cow in the world, at a cattle farm in Charigram, about 25 km from Savar on July 6, 2021. Photograph:( AFP )

People in Bangladesh are violating a nationwide lockdown over coronavirus to see Rani, being touted by its owners as the world's smallest cow.

She stands 51 centimetres (20 inches) tall and belongs to a dairy farm.

The 23-month-old dwarf cow at a farm near Dhaka is a media star after scores of newspapers and television stations drool over the prized animal.

There has been a tourist frenzy triggered by Rani's images on social media.

The people of Charigram, located 30 kilometres (19 miles) southwest of Dhaka, are flocking in rickshaws, despite a nationwide transportation shutdown caused by record numbers of coronavirus infections and deaths.

Rina Begum, who is from a neighbouring town, said she had never seen anything like it.

A little over 66 centimetres (26 inches) long and weighing only 26 kilograms (57 pounds), Rani's owners claim her to be 10 centimetres shorter than the smallest cow in Guinness World Records.

Despite the Coronavirus lockdown, "people come from long distances to take selfies with Rani," says Howlader, adding that Guinness World Records has promised a decision within three months.

The number of people who have visited Rani within the last three days alone is more than 15,000, he said adding that they're tired of the crowds.

A member of the Vechur breed, Manikyam, was measured at 61 centimetres high by Guinness World Records in June 2014.

Raji is a Bhutti cow, also known as a Bhutanese cow, which is renowned for its meat in Bangladesh. Her fellow Bhuttis are twice her size.

Despite the worsening virus situation, people have come in droves to the farm, the manager said. "We did not expect such high interest."

Dr Sajedul Islam, the chief veterinarian of the government in the region, said Rani is the result of genetic inbreeding and is unlikely to grow anymore.

Islam told the farm to limit visitors as Rani's health can be at risk due to so many people crowding the farm.