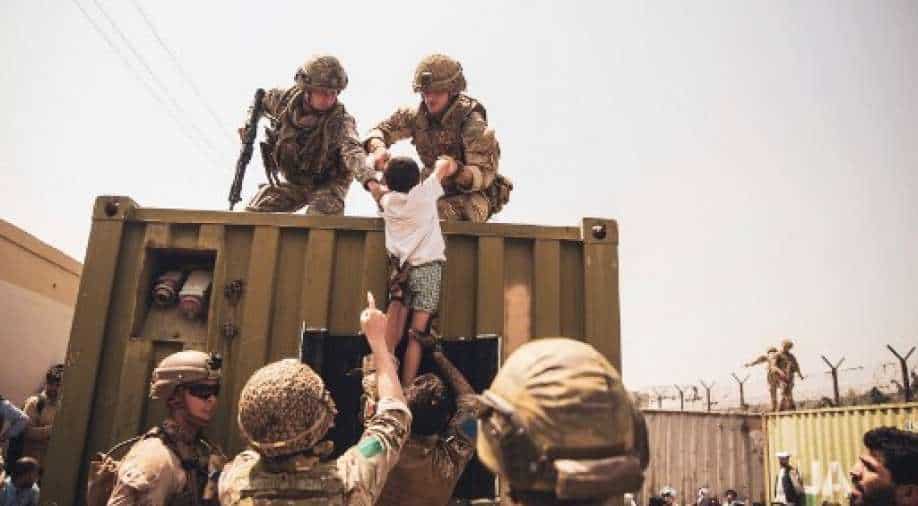 US Marines assist a child during an evacuation at Hamid Karzai International Airport in Kabul Photograph:( AFP )

UK's defence ministry had informed that at least seven Afghans were killed on Saturday at Kabul airport as thousands gathered to enter the compound with some scaling walls of the area.

After the UK government announced seven Afghans were killed near Kabul airport on Saturday as thousands gathered over the weekend, news wire Reuters quoting a NATO official said at least 20 people have died in the past week around the Hamid Karzai international airport.

The UK defence ministry had said the "conditions on the ground remain extremely challenging" as the US and its allies continue their operation at Kabul airport pulling out thousands of personnel amid a large crowd comprising of men, women and children desperate to escape the Taliban rule.

Reports said thousands of Afghans had turned up on Saturday at the airport with some crushed against the barricades. There were footage of soldiers pulling up those who were injured as they attempted to scale the wall at the airport.

Amid the confusion at the airport, US President Joe Biden hoped the airlift would be completed by August 31 while stating that he hoped it will not be extended.

The US has evacuated at least 30,300 people on military and coalition flights even as the US president said that "there is no way to evacuate this many people without pain and loss and heartbreaking images."

Meanwhile, Australia's foreign minister Marise Payne said it is ready to assist with evacuations from Afghanistan after August 31 if the Biden administration decides to delay the operation.

Australia has so far evacuated nearly 1,000 citizens and Afghans from the country in the past week.

The Netherlands said it will increase military presence in Afghanistan to help in the evacuation effort.