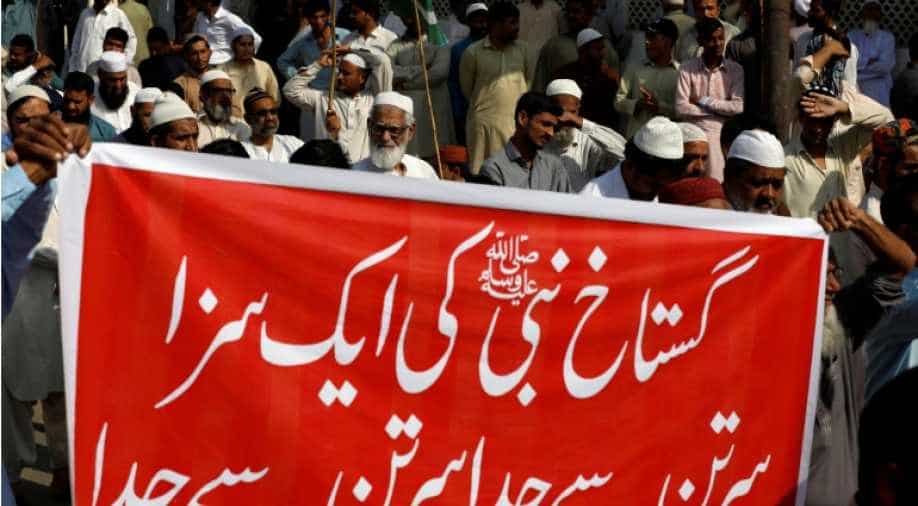 On October 31, mass protests began after the Pakistan Supreme Court announced its verdict acquitting Asia Bibi, a Christian woman in a blasphemy case.

Tehreek-e-Labbaik Pakistan (TLP) chief Khadim Rizvi and senior party leader Afzal Qadri were among the 500 people booked on Saturday for rioting and disrupting normal life in various parts of Lahore.

The police said that 11 cases were registered against Rizvi, Qadri and others for blocking arterial routes and disrupting peace, Geo News reported.

Two cases were also booked against protestors in the nation`s capital Islamabad on charges of vandalising public property.

Meanwhile, the Pakistan Interior Ministry, in a statement, said that it would take strict action against the demonstrators involved in rioting and disrupting normal life in various parts of the country.

On October 31, mass protests began after the Pakistan Supreme Court announced its verdict acquitting Asia Bibi, a Christian woman in a blasphemy case.

The demonstrations, led by TLP and other religious parties, blocked roads and vandalised public property in various parts of the country.

A three-judge special bench headed by Chief Justice of Pakistan Saqib Nisar, Justice Asif Saeed Khosa and Justice Mazhar Alam Khan Miankhel heard Asia`s 2014 appeal against her conviction and death sentence and overturned the ruling in favour of her on October 31.

After few days of rejecting reports of not putting Asia on the Exit Control List (ECL), the Pakistan Tehreek-e-Insaf (PTI) government succumbed to pressure and reached an agreement with the TLP on Friday for taking legal actions to not allow Asia and her family to leave the country.

Moreover, the government assured the people that a probe will be initiated to redress any deaths that may have occurred during the protests against the verdict.

The TLP also apologised to the people for hurting their sentiments or causing inconvenience to the citizens.

Asia was convicted and sentenced to death in 2010 for allegedly insulting Islam during an argument with three Muslim women.