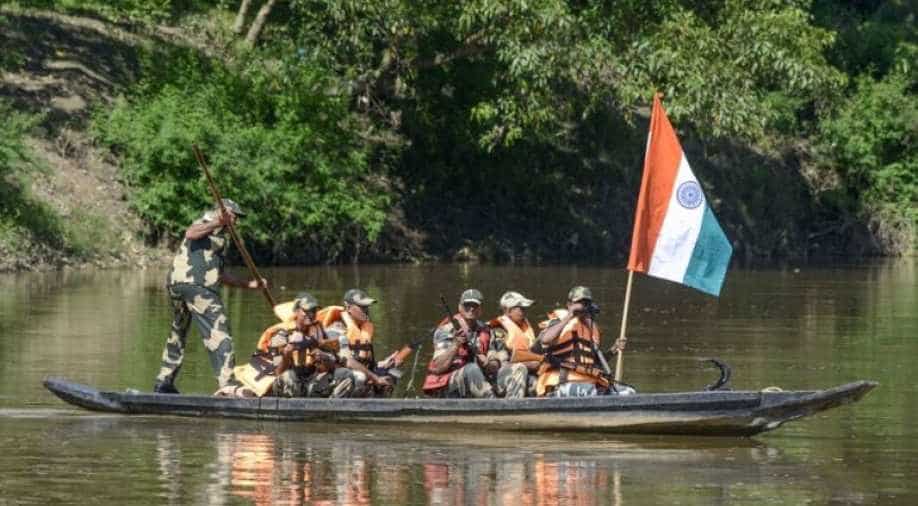 File Photo: Border Security Force (BSF) personnel keep a vigil on a boat during a patrol on the Gomati river near India-Bangladesh border ahead of India's 73rd Independence Day celebrations at Srimantapur village, some 59 km south of Agartala, the capital of the northeastern state of Tripura. Photograph:( AFP )

The Bangladeshi nationals had moved to as far as Bengaluru in south India where they were staying without documents, Shafeenul also said.

Around 445 trespassers have been detained by the Bangladesh authorities in the last two months while trying to return to Bangladesh after visiting India illegally, informed Director General Border Guard Bangladesh (BGB) - Shafeenul Islam.

At a press briefing on Thursday, he also said that in 2019 a total of 1,002 persons were detained while trying to return to Bangladesh after visiting India illegally, reported Dhaka Tribune.

He also informed that 2019 recorded the highest number of border killings.

Responding to a question whether NRC and CAA were discussed during the border coordination conference with India, he said, "It's their internal matter."

He further said that BGB is planning to buy modern arms and ammunition to secure the border alongside Myanmar.