Akhilesh will be chief minister after elections, no question of Samajwadi Party splitting: Mulayam Singh 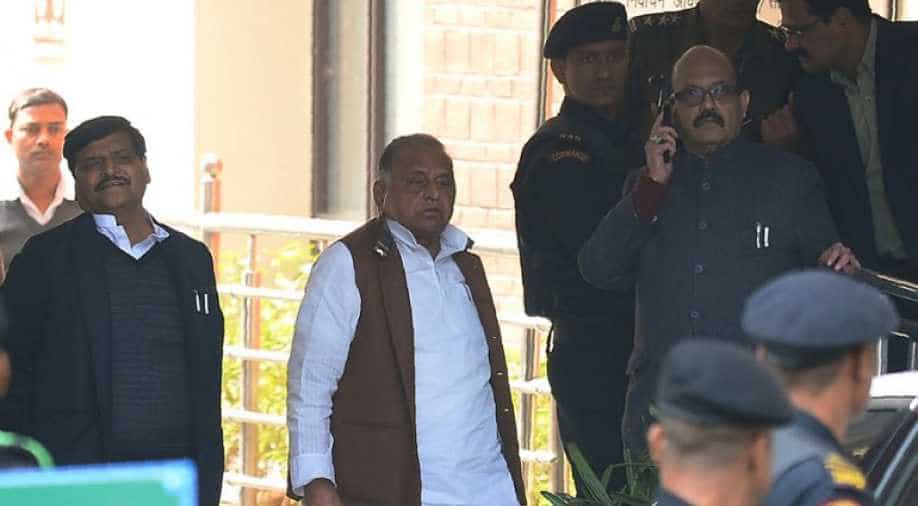 Mulayam Singh Yadav, patriarch of Uttar Pradesh's ruling Samajwadi Party indicated on Monday that he wanted to end the ongoing feud within the party, stating that his son Akhilesh was the face of the party for the upcoming elections in the state.

Mulayam Singh told news agency ANI that the party was united and would soon campaign as one in the state.

"For the benefit of the entire state, our party stands united. There is no question of any division whatsoever in the party and we will begin campaigning soon. Akhilesh will be the next chief minister, there is no doubt about that," he told ANI.

SP is in the middle of an intense power struggle with Mulayam and his brother Shivpal Yadav on one side and Mulayam`s son, Akhilesh, and cousin Ram Gopal Yadav on the other.

The warring factions had taken their dispute all the way to the Election Commission, staking their claim on the party's election symbol, the 'cycle'.

He was accompanied by his brother Shivpal Yadav and Amar Singh, both senior leaders of the party who are being held responsible for the infighting within the party by the Akhilesh camp.

"There is no rift between me and my son Akhilesh Yadav. My son is being provoked by one person," Mulayam Singh said after emerging from a meeting with the Election Commission in New Delhi today.

"There is some problem in the party, one person is behind this feud. Am sure that issues will be resolved," Mulayam Singh said in an apparent reference to his cousin Ram Gopal Yadav.

He had also said that the Election Commission will decide on which faction would have claim over the party's symbol, the cycle.

In his meeting with the Election Commission, Mulayam Singh also contested the affidavits of party leaders submitted by the faction owing allegiance to his son, alleging they were forged and asked the EC to get them verified.

The Akhilesh-led camp represented by Ram Gopal had on Saturday submitted an affidavit to the EC affirming that Samajwadi Party leaders were supporting the Uttar Pradesh chief minister. Ram Gopal had said that he submitted affidavits of 4,716 delegates of the total 5,731, indicating overwhelming support for Akhilesh.

Mulayam Singh, meanwhile, wrote a letter to the Rajya Sabha (Upper House) chairman, Hamid Ansari, asking him to expel Ram Gopal Yadav from the SP and as leader of the party in the Upper House, PTI reported on Monday. He also urged Ansari to shift Ramgopal's seat to the back benches following his expulsion from the party.

Sources in the party told PTI the letter informed the Rajya Sabha secretariat that Ram Gopal was expelled from the party for six years on 30 December, 2016 and ceased to be leader of SP's Parliamentary Party in the Upper House.

Party sources said he also told the Election Commission that the national convention called by Ram Gopal Yadav was unconstitutional. He also said that while there was a resolution appointing Akhilesh as party president and another one appointing him as its mentor, there was no resolution removing him from the party chief's post.

The assembly elections in the most populous and politically significant state in India will be held in seven phases beginning February 11.