Afghan election back in spotlight after Trump's Taliban tweets 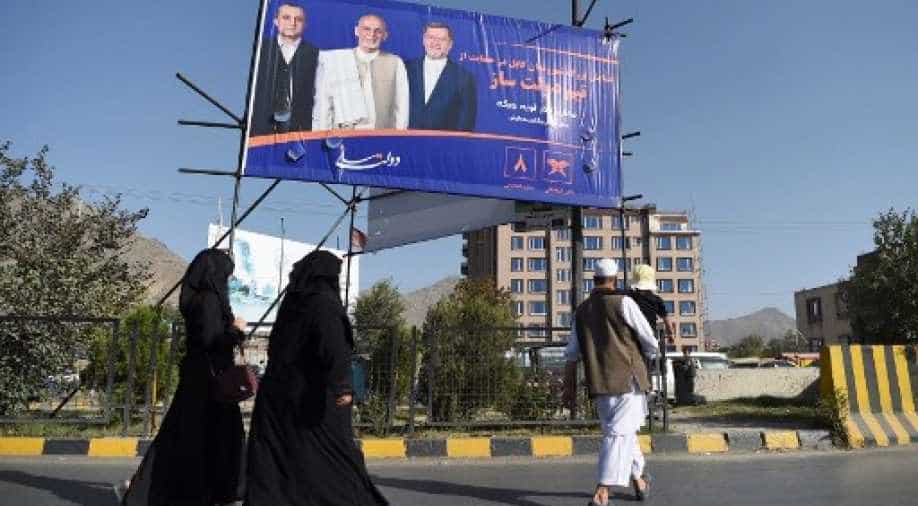 For months now a question mark has hung over the September 28 vote, in which President Ashraf Ghani will face off against his own Chief Executive Abdullah Abdullah, as America prioritized securing a deal with the insurgents that would allow it to begin exiting its longest war.

Afghans are bracing for fresh violence after Donald Trump abruptly scuttled US-Taliban talks, yanking this month's presidential election back into the spotlight as the militants look to keep voters from the polls with bloody attacks.

For months now a question mark has hung over the September 28 vote, in which President Ashraf Ghani will face off against his own Chief Executive Abdullah Abdullah, as America prioritized securing a deal with the insurgents that would allow it to begin exiting its longest war.

With the agreement seemingly imminent and the US-backed government in Kabul undermined as rumours swirled of an interim regime, many Afghans and observers had expected the poll to be cancelled outright.

Even the more-than-a-dozen candidates who include former warlords, ex-spies and onetime members of the country's communist regime did not appear to believe it would take place, with little in the way of campaigning.

As the incumbent, Ghani is presumed to be the favourite, though with the lack of campaigning or credible polling observers cautioned against making any predictions.

But with Trump's bombshell announcement Saturday that the US-Taliban talks were off, the situation changed.

The Taliban quickly made it known that the only alternative was more fighting and with renewed focus on the election, which they have always opposed, the polls are a prime target, as they seek to delegitimize any resulting government by minimizing turnout.

"The Taliban will do everything possible to disrupt the election, we expect more violence," Haroun Mir, an independent analyst based in Kabul, told AFP.

Abdul Waheed Wafa, the executive director of the Afghanistan Centre at Kabul University, described a mood of confusion and fear.

"Nobody at the moment is ready, not the people of Afghanistan, not the election commission and not even the government," he said.

The presidential vote, Afghanistan's fourth since the fall of the Taliban in 2001, has already been delayed twice this year.

Turnout could be "very, very low", Wafa added, citing fear of violence and a loss of hope among voters following widespread fraud allegations during the 2014 election, for which there was no credible turnout estimate.

Both Ghani and former anti-Soviet fighter Abdullah claimed they had won that contest, with the US stepping in to broker a fragile power-sharing agreement.

No incentive to back off

Last October's legislative elections were bloodied by a series of deadly attacks as the Taliban called on citizens to stay away.

"We are so scared we are wary, we are concerned and we don't know what kind of election we will have," Wafa said.

With US-Taliban suddenly scuppered by Trump's tweets, the insurgents are now expected to try to deprive Ghani of legitimacy which some already feel is in short supply after he was sidelined by Washington in their Taliban talks.

Ghani and his officials had complained loudly over being kept out. They see the election as a way to reaffirm their right to negotiate for Afghans.

"Any future path towards peace has to be based on the will of the Afghan people and it should be owned and led by the Afghan government," said government spokesman Sediq Sediqqi.

A key element of the US-Taliban talks had been securing a guarantee from the insurgents that they will hold a direct dialogue with Kabul, deemed crucial to ending the nearly 18-year conflict.

They have historically refused to speak to a government they deem a "puppet" of the US.

But if the government which has also been blighted by corruption and disunity does win a strong mandate, then "the Taliban will have no alternative but to deal with it", argues the analyst Mir.

The question is whether the elections can be seen as fair and representative, say experts from the Afghanistan Analysts Network.

AAN analyst Thomas Ruttig told AFP that with the election so near it was "difficult to speculate there is very little time left for campaigning".

The Taliban, he said, "have enough power to disrupt the vote".

If they do, as ever in Afghanistan, it is civilians who will pay a disproportionate price.

"Stop breaking more hearts!" Facebook user Omid Sharifi wrote this week, adding that there are no winners in the escalating violence.