Watch: No, it's not an alien! Bizarre fish with translucent head and tubular eyes spotted 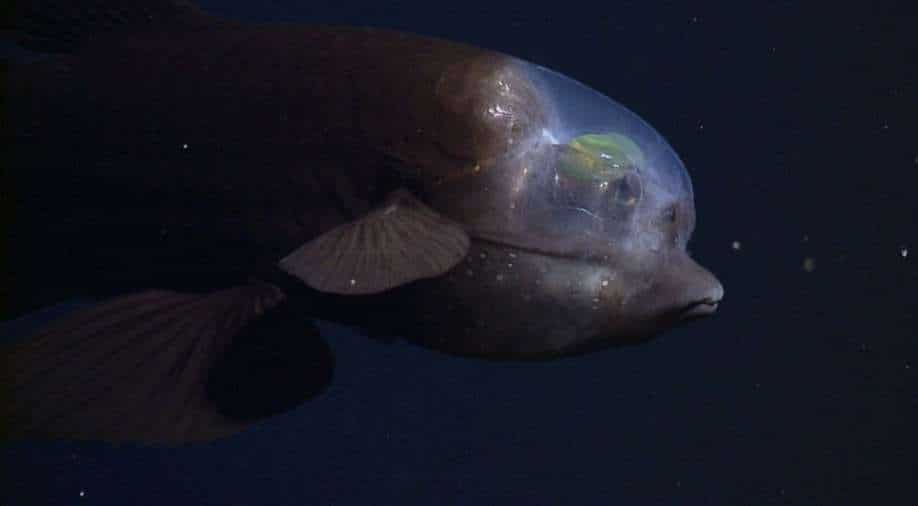 Barreleye fish (Macropinna microstoma) was spotted in a rare deep-sea sighting by remote-operated vehicle (ROV) of the Monterey Bay Aquarium Research Institute (MBARI) nearly 2,000 feet below ocean off the coast of California.

The video, which was released by MBARI on Thursday (December 9), study features of Barreleye can be seen, the most fascinating being its translucent barrel-shaped and tubular eyes.

MBARI revealed that during a dive with education and outreach partner, the Monterey Bay Aquarium, the team recorded the alien-like fish.

What makes the sighting rare? This particular species has been recorded only nine times by MBARI's remotely operated vehicles Ventana and Doc Ricketts despite logging more than 5,600 successful dives and recorded more than 27,600 hours of video.

MBARI noted that the barreleye lives in the ocean's twilight zone, at depths of 600 to 800 meters (2,000 to 2,600 feet), a place in oceans depths just beyond the reach of sunlight.

Look-wise, the fish are rather bizarre as their eyes look upwards to spot their favourite prey from the shadows they cast in the faint shimmer of sunlight from above.

Interestingly, MBARI researchers have learned that the barreleye can rotate its eyes beneath that dome of transparent tissue. It has also been learned that the fish are capable of directing their eyes forward, as well so that they can see the food while eating.

"Aquarist Tommy Knowles and his team were aboard MBARI’s R/V Rachel Carson with our ROV Ventana to collect jellies and comb jellies for the Aquarium’s upcoming Into the Deep exhibition when they spotted this fascinating fish. The team stopped to marvel at Macropinna before it swam away," MBARI revealed.

ALSO READ | Study shows that away from human touch, tropical forests can regenerate in 20 years

MBARI further revealed that they are working with the Aquarium to bring the deep sea next spring.

"'Into the Deep' will bring you face-to-face with deep-sea denizens like bloody-belly comb jellies, bubblegum corals, and Japanese spider crabs," MBARI stated.