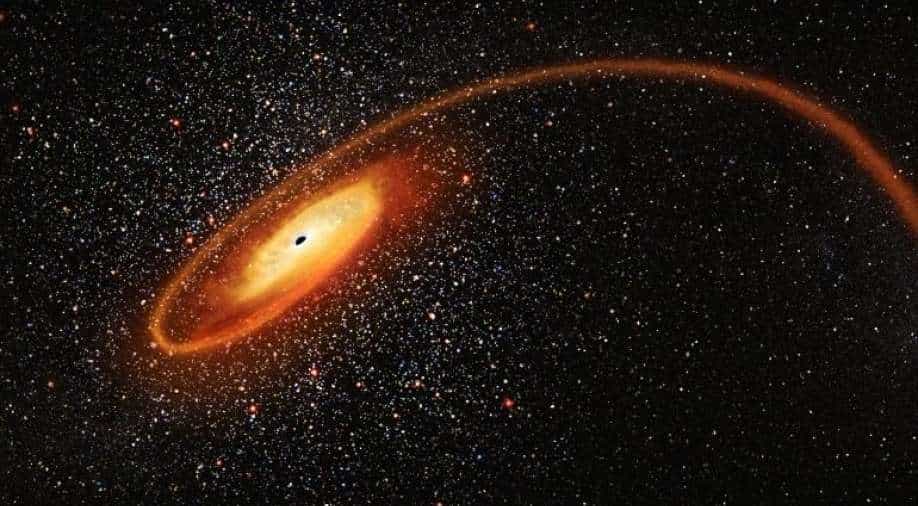 Black holes are extremely dense, with gravitational pulls so ferocious, not even light escapes

Astronomers have identified the first-ever wandering black hole in the Milky Way galaxy as per a new study.

"We report the first unambiguous detection and mass measurement of an isolated stellar-mass black hole," wrote a team of astronomers led by Kailash Sahu of the Space Telescope Science Institute.

Moving at a speed of 45 kilometers (28 miles) per second, the black hole is 5,200 light-years away. It received a modest natal 'kick' from its supernova explosion.

The researchers used Hubble Space Telescope (HST) to carry out precise astrometry of the source star of the event MOA-2011-BLG191/OGLE-2011-BLG-0462, in the direction of the Galactic bulge.

The remarkable event lasted around 270 days and was also unusual as it had high magnification.

The study, submitted to The Astrophysical Journal, is available on the pre-print server arXiv.

Black holes are extremely dense, with gravitational pulls so ferocious, not even light escapes.

"We show that the lens emits no detectable light, which, along with having a mass higher than is possible for a white dwarf or neutron star, confirms its black hole nature," Sahu said.

There are three categories of black holes. The smallest, like 'the Unicorn,' are so-called stellar mass black holes formed by the gravitational collapse of a single star. There are gargantuan 'supermassive' black holes like the one at our galaxy's center, 26,000 light years from Earth, which is four million times the sun's mass. A few intermediate-mass black holes also have been found with masses somewhere in between.

It devours material blowing from the surface of the companion star it tightly orbits, a “blue supergiant” about 40 times our sun’s mass. It started its existence 4 million to 5 million years ago as a star up to 75 times the sun’s mass and collapsed into a black hole a few tens of thousands of years ago.