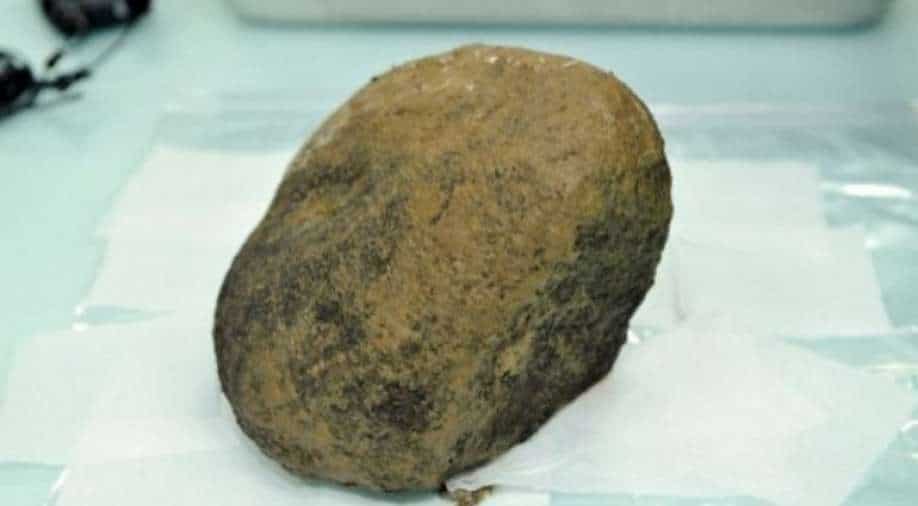 Representative | This handout picture taken on March 11, 2014 shows a chondrite (a type of meteorite) found in the southeastern city of Jinju, at the Korea Polar Research Institute in Incheon, west of Seoul.  Photograph:( AFP )

Scientists recently discovered the oldest volcanic rock on our planet.  In 2020, the volcanic rock was discovered in the Sahara desert and can be dated back to a long time ago, precisely 2 million years after the creation of the solar system as we know it today, or simply 4.6 billion years ago!

Based on this dateline, this is the oldest rock to be retrieved from Earth - a million years older than the previous record-holding rock. Volcanic rocks are considered building blocks of planets.

Jean-Alix Barrat from the University of Western Brittany in France claimed that they had been working on meteorites for over 20 years. NewScientists quoted Barrat saying - "This is possibly the most fantastic new meteorite I have ever seen''.

The meteorite is called Erg Chech 002 or EC 002 and was found to be unlike any other meteorite they had ever seen.

Also read: This sea slug species can regrow its whole body - out of its head!

The rock in question made of "andesite" is found mostly in subduction areas on Earth. These are places where tectonic plates collided, following which they were pushed beneath the other. This is rarely found among meteorites. Scientists conducted an analysis of the chemical make-up of the meteorite and found that it was once molten and that it solidified nearly 4.6 billion years ago.

What does this imply?
The rock can be traced back to an ancient protoplanet that disintegrated early in the solar system's past.  This relic is one of a kind, for no other asteroids resemble the make-up of the rock. Other remains of the ancient protoplanet have most likely perished by crashing or smashing.

Barratt believes they shall not be able to find a sample older than this one, adding that retrieving information becomes complicated as scientists attempt to move closer to understanding how the solar system came into being.

If further study of this rock and ones similar to it is undertaken, we may be able to ascertain how Earth and other planets in our solar system were formed.