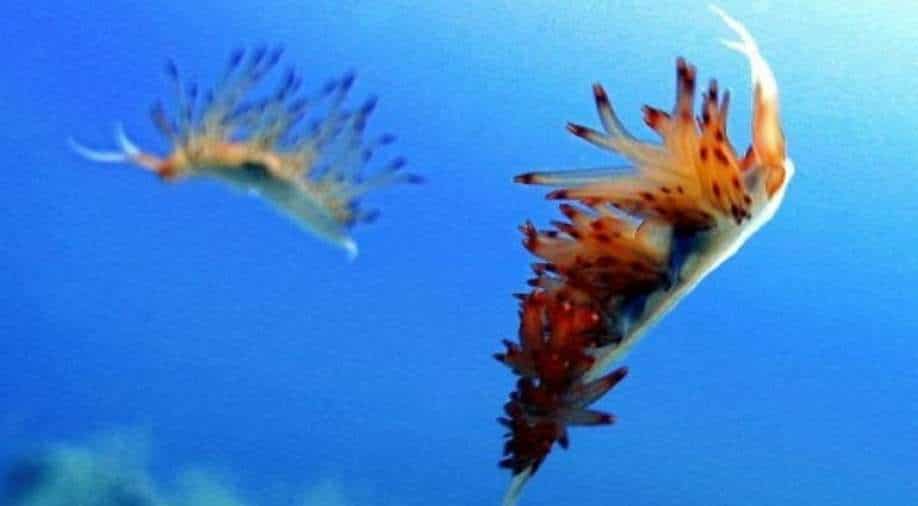 Representative image | Two sea-slugs (Godiva banyulensis) from the Glaucidae familia swim in the Mediterranean sea, 29 July 2004, off the town of Kas Photograph:( AFP )

Now, scientists believe that a particular species can actually grow a whole body!

Many species around the world possess the otherworldly capability to re-engineer their body - to essentially be able to grow new organs in place of old ones that may have been rendered unusable by injuries or natural factors.

Now, scientists believe that a particular species can actually grow a whole body out of severed heads, but they're unsure why.

For perspective - starfish are able to regenerate their arms, axolotls can reconfigure their spinal cords among many. But none of them compare to the newly found sea slugs that can grow a whole new body of their own.

According to researchers from the Nara Women's University in Japan, who published their study in Current Biology - a peer-reviewed journal, two species of sea slugs can regrow bodies that come equipped with a heart and other internal organs intact.

Along with this, scientists witnessed the unthinkable as creatures were seen floating without their bodies. One of them moved around with a body twice!

Upon separation, the head was able to move on its own, and in a matter of a few days, the wound behind the head of the slug had healed and closed off.

Scientists also found that within hours of detachment, young sea slugs began feeding on algae. In less than a week, they were able to regenerate their hearts.

An adult's head lived for about ten days, after which researchers found a new body with new organs which was formed by the detached head within three weeks.

Even then, there were some limitations for the old bodies were not able to regenerate body parts both among the young and old sea slugs. But even then, these cast-off bodies of slugs could feel sensation for days, and in some cases months.