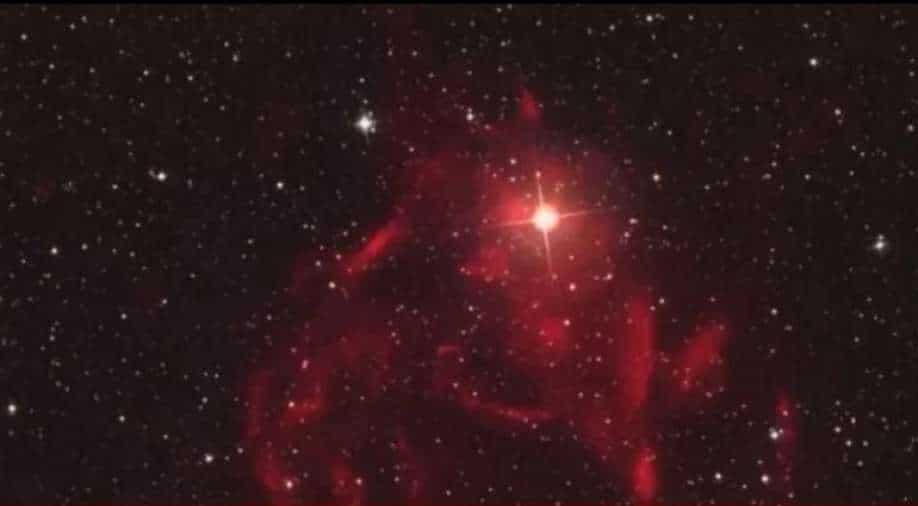 In this picture, the galactic nebula around YY Hya can be seen Photograph:( Twitter )

Nebulae are made up of gas, primarily hydrogen and helium, and fine cosmic dust

The research, published in Astrophysics and Astronomy, shows that binary star YY Hya has a strong UV excess. This suggests the existence of a hot and compact binary companion.

''Toward the end of their lives, normal stars inflate into red giant stars. Since a very large fraction of stars is in binary pairs, this affects the evolution at the end of their lives,'' said the study's lead author Stefan Kimeswenger from the Department of Astro and Particle Physics at Innsbruck University, Austria.

''In close binary systems, the inflating outer part of a star merges as a common envelope around both stars. However, inside this gas envelope, the cores of the two stars are practically undisturbed and follow their evolution like independent single stars,'' he added.

The space between stars is dotted with twisting towers studded with stars, unblinking eyes, ethereal ribbons, and floating bubbles.

These fantastical shapes, some of the universe’s most visually stunning constructions, are nebulae, clouds of gas and dust that can be the birthplace of stars, the scene of their demise, and sometimes both.

Nebulae are made up of gas, primarily hydrogen and helium, and fine cosmic dust. These clouds are part of the interstellar medium of extremely low-density gas and dust that exists between stars in the void of space.

''Moreover, fragments as large as 39 light-years apart have also been found. Since the object lies slightly above the Milky Way, the nebula was able to develop largely undisturbed by other clouds in the surrounding gas.''

"They are too large for the field of view of modern telescopes, and at the same time, they are very faint. Moreover, their lifetime is rather short, at least when considered in cosmic time scales. It is only a few hundred thousand years," he added.

Nebulae happen in places where the interstellar medium has become dense enough to form clouds. That could be because gravity has pulled the gas and dust together, or because stars have died and spewed their contents into the cosmos.

Several types of nebulae exist, and each individual nebula is a unique showcase of the phenomena and processes happening within. They often live side by side, with smaller nebulae populating larger clouds of gas and dust to form giant complexes of star birth and death.