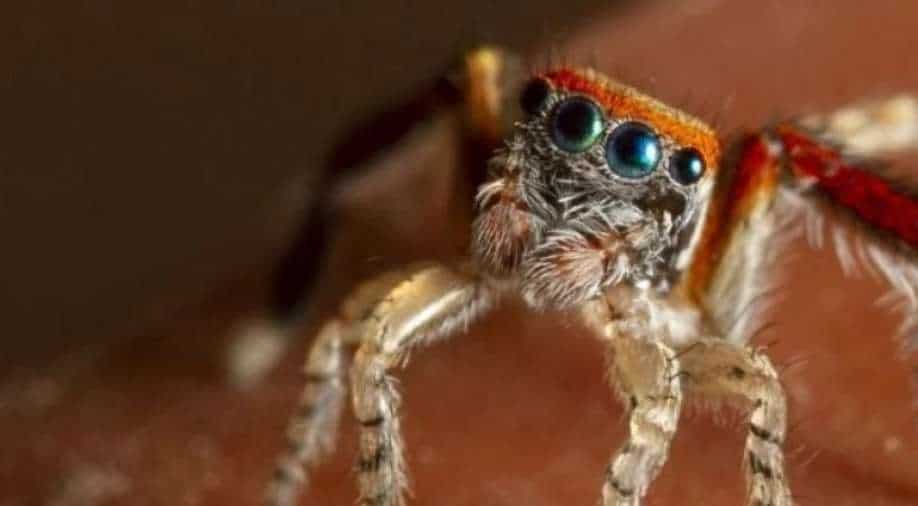 In this picture, a jumping spider can be seen with a furry red crown and legs (Image credit: University of Cincinnati) Photograph:( Others )

Scientists have detected colour blindness in jumping spiders in a recent study.

The research, published in 'The Science of Nature,' examines Saitis barbipes, a common jumping spider found in Europe and North Africa.

The flamboyant dandies of the eight-legged set, have names inspired by peacocks, cardinals, and other colourful icons.

“We assumed they were using color for communication. But we didn’t know if their visual system even allowed them to see those colors,” said David Outomuro, a UC postdoctoral researcher now at the University of Pittsburgh.

Outomuro was first co-author of the study with Mateusz Glenszczyk, a researcher from the University of Hamburg.

Biologists identified patches on the spider that strongly absorb ultraviolet wavelengths to appear as bright “spider green” to other jumping spiders.

The red colours that are so vivid to us likely appear no different than black markings to jumping spiders.

“It’s a bit of a head-scratcher what’s going on here,” professor Morehouse said. “We haven’t solved the mystery of what the red is doing.”

Animals use color in all sorts of ways, including camouflage, warning potential predators of their toxicity, showing off to potential mates or intimidating rivals. But it’s not always apparent what bright colors might signify, Morehouse said.

“We spent a lot of time talking about it as a group. What else could it be? I feel there’s an interesting story behind the mystery,” he said.

The results were surprising, said senior study author Tedore, a research associate at the University of Hamburg.

“Males have bold red and black coloration on their forward-facing body surfaces which they display during their courtship dances; whereas, females lack red coloration altogether,” she said. “This initially suggested to us that the red color must play some role in mate attraction.

“Instead, we found that red and black are perceived equivalently, or nearly so, by these spiders and that if red is perceived as different from black, it is perceived as a dark ‘spider green’ rather than red,” Tedore said.

The spider’s red and black colors might improve defensive camouflage, the study suggested.

“For predators with red vision, at natural viewing distances, the spider's red and black color patches should blur together to become an intermediate orangish-brownish color, which would help the spider blend in with its leaf litter habitat better than all-black coloration would,” Tedore said.