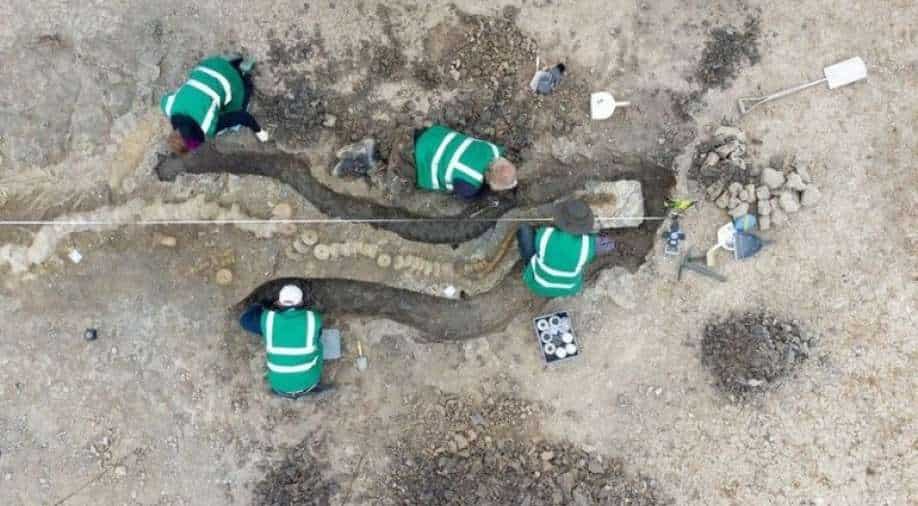 In this picture, excavators can be seen at the Rutland Water Nature Reserve with the sea dragon (Image credit: Anglian Water) Photograph:( Others )

Paleontologists at the Rutland Water Nature Reserve have discovered a massive sea dragon.

Named after one of the UK’s greatest fossil finds, the 10m-long sea predator is called an ichthyosaur and it is 180 million years old.

"I rang up the county council and I said I think I've found a dinosaur," said the reserve's employee Joe Davis while describing his experience.

In response, the council told him, "We don't have a dinosaur department at Rutland County Council so we're going to have to get someone to call you back."

In the early 19th century, fossil hunter and paleontologist Mary Anning had discovered the first ichthyosaurs, which are called sea dragons because they tend to have very large teeth and eyes.

According to Davis, "I looked down at what seemed like stones or ridges in the mud and I said this looks a bit organic, a bit different."

"Then we saw something that looked almost like a jawbone."

“Despite the many ichthyosaur fossils found in Britain, it is remarkable to think that the Rutland ichthyosaur is the largest skeleton ever found in the UK. It is a truly unprecedented discovery and one of the greatest finds in British palaeontological history,” said Dean Lomax, a paleontologist who has studied the species.

"Usually we think of ichthyosaurs and other marine reptiles being discovered along the Jurassic Coast in Dorset or the Yorkshire coast, where many of them are exposed by the erosion of the cliffs. Here at an inland location is very unusual."

Last year, a team of paleontologists came in to excavate the remains when the water levels at the Rutland reservoir were lowered.