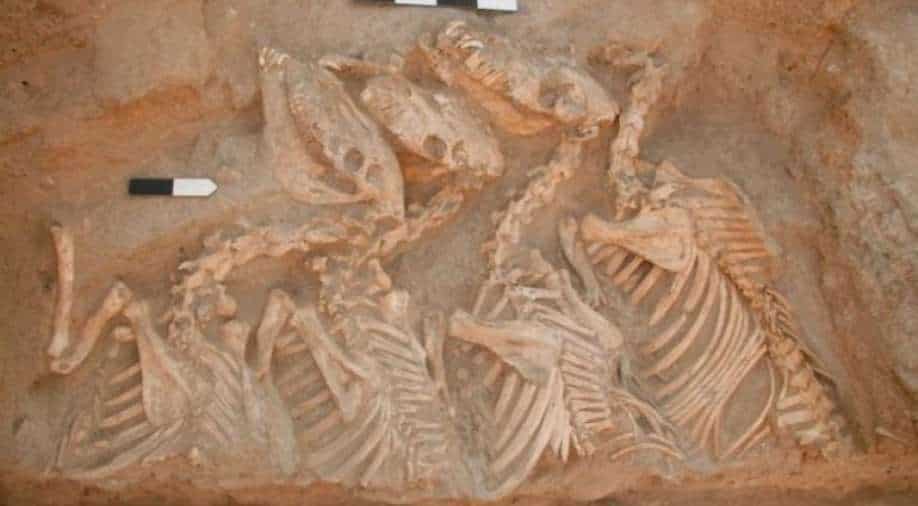 The kunga bones can be seen at a princely burial complex at Tell Umm el-Marra in Northern Syria (Image credit: John Hopkins University) Photograph:( Others )

The research, published in Science Advances, shows domestic horses were introduced in the southern Caucasus and Anatolia during the Bronze Age

Scientists have identified the first human-bred hybrid animals by using DNA sequencing in a recent study.

The research, published in Science Advances, shows domestic horses were introduced in the southern Caucasus and Anatolia during the Bronze Age.

It is based on samples from the early Neolithic to the Iron Age that encompasses the presumed transition from wild to domestic horses.

"So they were somehow different, but it was not clear what the difference was."

A combination of textual, iconographic, and archaeozoological data suggest that, by the mid to late third millennium BCE, domestic horses were introduced from neighboring mountain regions into Mesopotamia (modern Iraq and northeast Syria), where they were often referred to “donkey of the mountain.”

According to Geigl, "They really bio-engineered these hybrids."

"There were the earliest hybrids ever, as far as we know, and they had to do that each time for each kunga that was produced – so this explains why they were so valuable."

The domestication of the horse approximately 5500 years ago represents one of the most important technological innovations in the ancient world.

With the harnessing of horsepower, political, economic, and social relationships throughout the ancient world were transformed as horses revolutionized transportation and affected patterns of trade, warfare, and migration.

"Since hybrids are usually sterile, it means there was a remarkable level of energy devoted to constantly capturing and raising wild onagers, breeding them with domestic donkeys and then training these teams of prestigious kungas (which would only last for one generation)," said Benjamin Arbuckle, an anthropological archaeologist at the University of North Carolina at Chapel Hill.

"It really shows the innovative and experimental nature of ancient people which I think some people only associate with the modern world and also their willingness to invest a lot of resources in the artificial creation of an expensive animal used only by and for elites."

"This work settles the idea that hybrids were in fact created by ancient Mesopotamians, which is very cool," Arbuckle said.

"But we still don't know how widespread this animal was and it also doesn't address additional questions relating to other types of hybrid equids created in the Bronze Age. So there are plenty more questions."