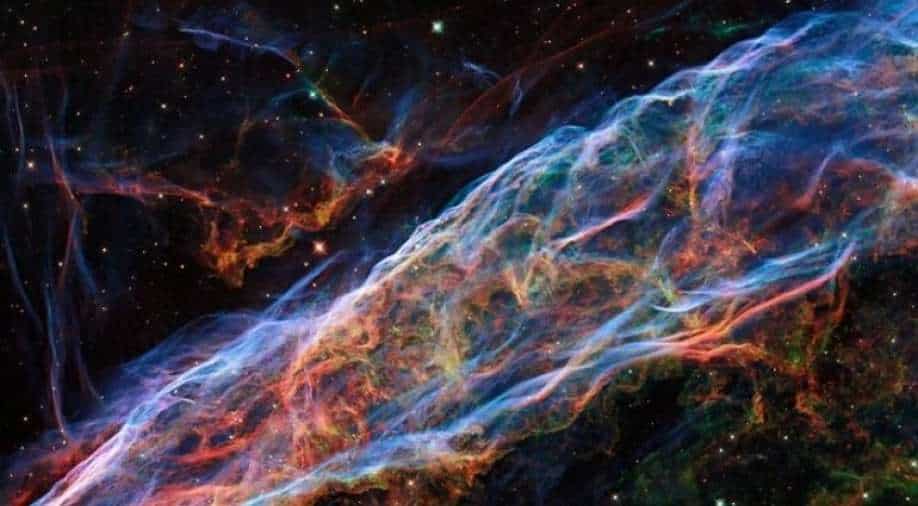 The Veil Nebula is the visible portion of the nearby Cygnus Loop, a supernova remnant formed roughly 10,000 years ago by the death of a massive star

The National Aeronautics and Space Administration's Hubble Telescope has released a stunning image of the Veil Nebula bringing out fine details of the it’s delicate threads and filaments of ionised gas.

The Veil Nebula lies around 2100 light-years from Earth in the constellation of Cygnus (The Swan), making it a relatively close neighbour in astronomical terms. Only a small portion of the nebula was captured in this image.

The Veil Nebula is the visible portion of the nearby Cygnus Loop, a supernova remnant formed roughly 10,000 years ago by the death of a massive star. The Veil Nebula’s progenitor star, which was 20 times the mass of the Sun, lived fast and died young, ending its life in a cataclysmic release of energy. Despite this stellar violence, the shockwaves and debris from the supernova sculpted the Veil Nebula’s delicate tracery of ionised gas, creating a scene of surprising astronomical beauty.

Astronomers suspect that before the Veil Nebula’s source star exploded it expelled a strong stellar wind. This wind blew a large cavity into the surrounding interstellar gas. As the shock wave from the supernova expands outwards, it encounters the walls of this cavity — and forms the nebula’s distinctive structures. Bright filaments are produced as the shock wave interacts with a relatively dense cavity wall, whilst fainter structures are generated by regions nearly devoid of material. The Veil Nebula’s colourful appearance is generated by variations in the temperatures and densities of the chemical elements present.

The blue coloured features, outlining the cavity wall, appear smooth and curved in comparison to the fluffy green and red coloured ones. This is because the gas traced by the blue filter has more recently encountered the nebula’s shock wave, thus still maintain the original shape of the shock front. These features also contain hotter gas than the red and green coloured ones. The latter excited longer ago and have subsequently diffused into more chaotic structures.

Hidden amongst these bright, chaotic structures lie a few thin, sharply edged, red coloured filaments. These faint hydrogen emission features are created through a totally different mechanism than that which generates their fluffy red companions, and they provide scientists with a snapshot of the shock front. The red colour arises after gas is swept into the shock wave, which is moving at almost 1.5 million kilometres per hour, and the hydrogen within the gas is excited by particle collisions right at the shock front itself.

Despite utilising six full Hubble fields of view, these new WFC3 images cover just a tiny fraction of the nebula’s outer limb. Located on the west side of the supernova remnant, this section of the outer shell is in a region known as NGC 6960 or more colloquially the Witch’s Broom Nebula.