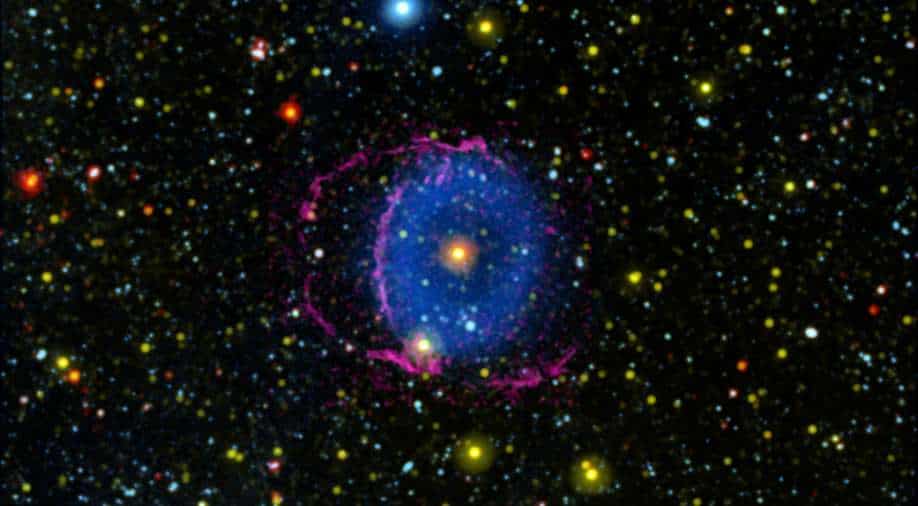 NASA's Jet Propulsion Laboratory has resolved a 16-year-old cosmic mystery and found the missing links to the Blue Ring Nebula.

A new study published online on Wednesday in the journal Nature may have cracked the case.

By applying cutting-edge theoretical models to the slew of data that has been collected on this object, the authors posit the nebula, a cloud of gas in space, is likely composed of debris from two stars that collided and merged into a single star.

While combined star frameworks are believed to be genuinely normal, they are almost difficult to concentrate following they structure since they're clouded by flotsam and jetsam the crash kicks up. When the garbage has cleared - at any rate countless years after the fact - they're trying to distinguish on the grounds that they look like non-consolidated stars.

The Blue Ring Nebula has all the earmarks of being the missing connection: Astronomers are seeing the star framework two or three thousand years after the consolidation when proof of the association is as yet abundant. It gives off an impression of being the main known cause of a consolidated star framework at this stage. 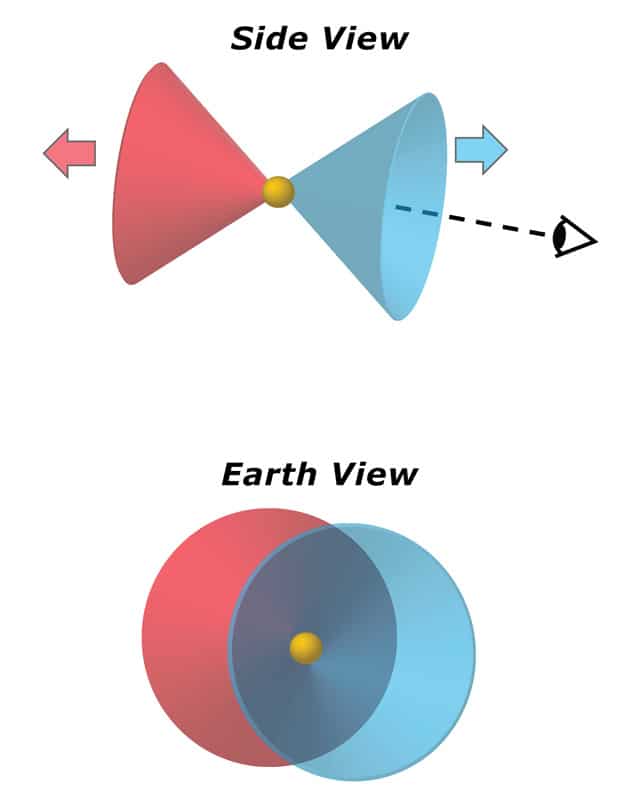 The Blue Ring Nebula consists of two hollow, cone-shaped clouds of debris moving in opposite directions away from the central star. The base of one cone is traveling almost directly toward Earth. As a result, astronomers looking at the nebula see two circles that partially overlap. Credit: NASA

The group inferred that the cloud was the result of a moderately new heavenly consolidation that probably happened between a star like our Sun and another star just around one-10th that size (or around multiple times the mass of Jupiter). Approaching an incredible finish, the Sun-like star started to grow, crawling nearer to its buddy. In the end, the more modest star fell into a descending twisting toward its bigger buddy. En route, the bigger star destroyed the more modest star, enclosing itself by a ring of flotsam and jetsam prior to gulping the more modest star altogether.

This was the savage occasion that prompted the development of the Blue Ring Nebula. The consolidation dispatched a haze of hot trash into space that was cut in two by the gas plate. This made two cone-formed trash veils of mist, their bases moving ceaselessly from the star in inverse ways and getting more extensive as they travel outward. The base of one cone is coming straightforwardly toward Earth and the other legitimately away. They are too weak to even think about seeing alone, however, the territory where the cones cover (as observed from Earth) frames the focal blue ring GALEX noticed.

Centuries passed. The extending flotsam and jetsam cloud cooled and shaped particles and residue, including hydrogen atoms that crashed into the interstellar medium, the scanty assortment of molecules, and vigorous particles that occupy the space between stars. The impacts energized the hydrogen atoms, making them emanate in a particular frequency of far-UV light. Over the long haul, the shine turned out to be sufficiently brilliant for GALEX to see.

Heavenly consolidations may happen as regularly as once like clockwork in our Milky Way world, which means it's conceivable that a sizeable populace of the stars we find in the sky was once two.

"We see a lot of two-star frameworks that may combine some time in the future, and we think we've recognized stars that blended possibly a great many years prior. However, we have practically no information on what occurs in the middle of," said Metzger. "We think there are presumably a lot of youthful remainders of heavenly consolidations in our system, and the Blue Ring Nebula may show us what they resemble so we can recognize a greater amount of them."

Despite the fact that this is likely the determination of a 16-year-old riddle, it might likewise be the start of another part in the investigation of heavenly consolidations.

"Unfortunately GALEX had the option to discover this truly weak article that we weren't searching for however that ends up being something truly intriguing to space experts," said Seibert. "It just repeats that when you take a gander at the universe in another frequency or in another way, you discover things you never envisioned you would."