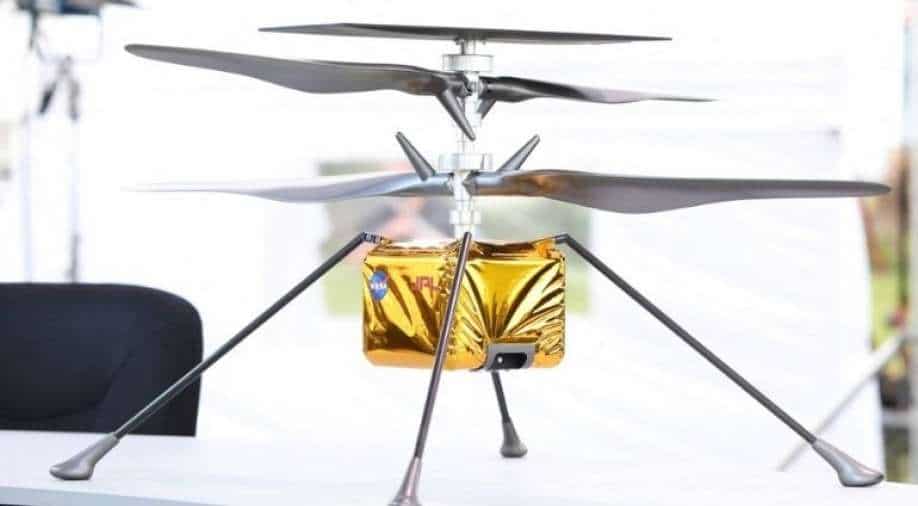 As of now, the helicopter is being transported to Mars through Perseverance Rover

The world is advancing using technology and science, and the space organisation NASA is hoping to turn the tide for good by flying a helicopter on the planet Mars.

NASA is hoping to be able to fly a helicopter to Mars for the first time. However, this chopper will have to face a lot of challenges, which would be more and different from the usual spacecraft.

Also read| NASA is offering $500,000 to cooks who can make other worldly meals for astronauts

Being transported aboard the Mars 2020 spacecraft, which will be arriving at Mars on Thursday, the small Ingenuity helicopter will also have to face the challenge of battling the atmosphere of Mars, which is just one per cent the density of Earth's.

The 'helicopter', in reality, looks more like a mini-drone of Earth and weighs nearly four pounds (1.8 kilograms). This 'mini drone' has blades which are much larger than usual and can therefore spin nearly five times faster than the same speed required to generate the lift on Earth — 2,400 revolutions per minute.

With four feet, a box-like body, and four carbon-fibre blades arranged in two rotors spinning in opposite directions, Ingenuity comes also gains help from Mars' gravitational force, which is a third of the planet Earth.

Ingenuity is also equipped with two cameras, computers and navigation sensors. The helicopter uses solar cells to recharge its batteries, of which majority of it is used to stay warm on cold Martian nights with the temperature falling to minus 130 degrees Fahrenheit (minus 90 degrees Celsius).

As of now, the helicopter is being transported to Mars through Perseverance Rover. It will drop Ingenuity to the Martian ground upon landing, and will then drive away on its own path.

Ingenuity will fly at altitudes of 10-15 feet (3-5 meters) and travel as far as 160 feet (50 meters) from its starting area and back. Each of these flights will last up to a minute and half, which is much more in comparison to Wright Brothers' 12-seconds flight in North Carolina, back in 1903.

The helicopter will not be controlled by joystick from Earth due to its distance from the Earth, and has therefore been designed to fly autonomously. Its onboard computers will work with its sensors and cameras to keep it on a path programmed by its engineers.

If the mission is successful, it "basically opens up a whole new dimension of exploring Mars," said Bob Balaram, Ingenuity's chief engineer.