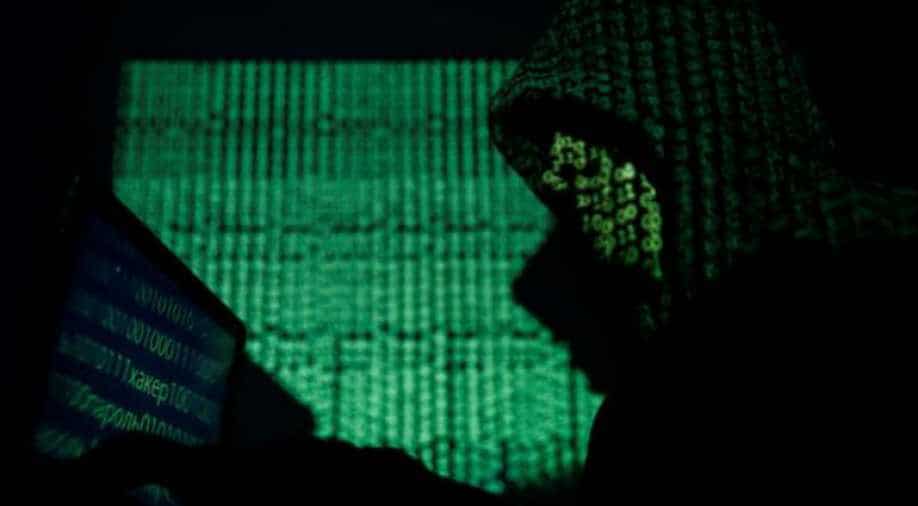 A hooded man holds a laptop computer as cyber code is projected on him in this picture illustration Photograph:( Reuters )

Cyber attacks are good for cyber security business, even though such attacks underscore the industry's failings. ||

For Kris Hagerman, chief executive of UK-based cyber security firm Sophos Group, the past week could have been bad. The WannaCry "ransomware" attack hobbled some of its hospital customers in Britain's National Health Service, forcing them to turn away ambulances and cancel surgeries.

The company quickly removed a boast on its website that “The NHS is totally protected with Sophos.” In many industries, that sort of stumble would likely hit a company's reputation hard.

Yet on Monday, three days after the global malware attack was first detected, Sophos stock jumped more than 7 per cent to set a record high and climbed further on Wednesday after the company raised its financial forecasts.

As for most other cyber security firms, highly publicized cyber attacks are good for business, even though experts say such attacks underscore the industry's failings.

Hagerman pointed out that his company only claimed to protect 60 per cent of NHS affiliates and that other factors contributed to the disaster at the hospitals.

Yet Hagerman acknowledged that Sophos did not update its basic antivirus software to block WannaCry until hours after it hit customers.

Security experts say hospitals, where the stakes are especially high, represent a case study in how legacy industries need to up their cyber security game.

"We've tolerated a pretty poor level of effectiveness, because so far the consequences of failure have been acceptable," said Josh Corman, a cyber security industry veteran now working on related issues at the Atlantic Council and a member of a healthcare security task force established by the US Congress.

"We are going to see failure measured in loss of life and a hit to GDP, and people will be very surprised."

Some long-lived medical devices have more than a thousand vulnerabilities, Corman said, and perhaps 85 per cent of US medical institutions have no staff qualified for basic cyber security tasks such as patching software, monitoring threat advisories and separating networks from one another.

But there are other causes too, including a lack of accountability that stems from the wide range of technology handlers: computer software vendors, antivirus suppliers, in-house professionals, consultants and various regulators.

"What’s needed is punishment of the negligent," said Ross Anderson, a University of Cambridge pioneer in studying the economics of information security, referring to the hospitals that did not stop WannaCry.

"This is not about technology. This is about people fouling up in ways people would get a pink slip for” in less-insulated environments, he said, meaning they would lose their jobs.

For now, though, there are few signs of any revamp in large institutions' approach to cyber security - and little incentive for contractors in the cyber security industry to change.

Sophos was not the only company whose stock rose on Monday, as the global scale of WannaCry became apparent. Shares of US-based FireEye and Qualys both rose more than 5 per cent.

But Sophos stood out, aided by higher expectations for a product the company introduced last year to fend off ransomware - so called because the authors of the malware demand a 'ransom' to restore a user's infected computer - which worked at the hospitals that had installed it.

"It's good news for our business," one Sophos employee, who asked not to be named, told Reuters this week. "We were so inundated with people calling us."