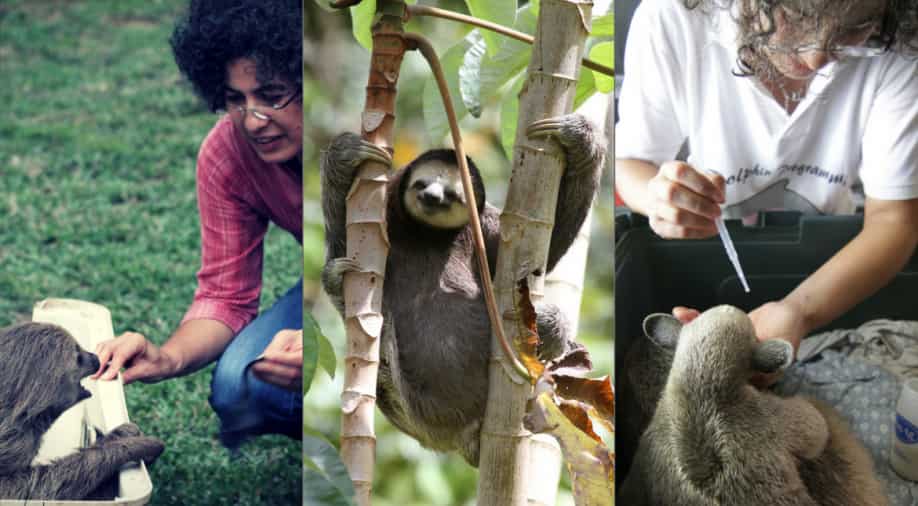 Super-savior Monique Pool, also known as the Sloth Lady has rescued 700 sloths and rehabilitated them in her house over a period of 12 years (Photo Courtsey: Monique Pool) Photograph:( Others )

Imagine an alien massacre destroys our homes, and what remains is a world unfit for human survival. We are physically and emotionally hurt. Mankind is directionless, and there's no sign of help or hope.

This is what happens to wild animals when their homes, the forest, are cut down. We place them in an environment their natural instincts don't recognise.

One species to face this is the sloth of South America. With trees being rapidly cut down they were left homeless, injured and tormented. Until one day they saw a ray of hope.

A human came like a hero to save them, by sheltering them in her own house. A place that was unfamiliar but felt safe. She fed them, soothed them and when they were ready put them back into their natural homes. Over a 12-year period super-saviour Monique Pool, also known as the "Sloth Lady", has rescued 700 sloths.

Pool fell in love with sloths after she took in Lucia, a baby from a rescue centre. Today 14 sloths safely reside in her house, while she continues to rescue more and advocate for their conservation rights.

Sloths: What are they?

It all began in 2005 when Pool lost her dog and phoned the local Animal Protection Society to see if they'd found her. They hadn't, but she was told about a baby sloth they didn't know how to look after. Even though she was clueless about sloths, she offered to take it in and was instantly smitten.

To learn how to take care of her newly-found love, she consulted another sloth rescuer in Costa Rica. It turns out sloths consume goat's milk, as cow's milk is fatal.

“My first baby will always remain in my heart.  He died within two years and I didn't know why at first. The experience taught me how little expertise there was in their rehabilitation and care. He is the reason I continue to do this work.”

Her motivation to establish an organisation came from her desire to help one animal. That alone showed her the need to ensure the survival of this species.

The rescue process begins with a call from a concerned community member.  Pool travels to the animal's location to pick it up. “Sloths are difficult to rescue considering their strong climbing skills and ability to hang on to anything with their strong grip.”

Once the sloth has been safely rescued, she brings them back to her rehabilitation centre and performs an examination.

“Some of them have come to us with severe wounds and sometimes completely debilitated, always caused by humans. These types of animals do not make it, sloths do everything slow, even dying. Sometimes I sit with them, chanting to them mantras to help them make the transition.”

If the animal is healthy, it is released back in the forests. Otherwise, it is treated until it's ready to be on its own.

“They are not pets, they are wild animals. They're capable of taking care of themselves as long as they are in their natural surroundings and that is where I decided to put them. It's a special experience to watch a sloth climb on a tree, deep in the safety of a forest.”

In 2012, Pool faced a crisis that she calls "Sloth Armageddon". A forest near her city was being cleared and she was to rescue 14 sloths. As 50-foot-high trees were cut down, sloths fell to the ground, to be picked up by Pool and her team.

"There were so many of them, it was hard to open the cage and keep them all in," she says. "As soon as they saw the doors open, they would try and get out." At night, males would fight and had to be separated.

Four days into the rescue, they realised they were dealing with a lot more than 14 sloths. "After a month we were close to 200 sloths," says Pool. "At one point, we had 17 babies being fed with droppers."

Super-savior Monique Pool, also known as the Sloth Lady has rescued 700 sloths and rehabilitated them in her house over a period of 12 years. (Others)

“They are peaceful and smiling creatures but far from easy to keep. Unlike most animals, sloths that are moving are sloths that are unhappy. When they sit, eat and sleep, is when they are happy.”

Taking care of sloths is a challenge in itself. Since there is limited knowledge about their biology, Pool struggled to keep these furry animals healthy and help them recover from traumatic events. The adult sloths need to be fed three times a day and babies every few hours.

“Sloths have very sensitive diets. Our team has to go to the forest every day to fetch fresh leaves.”

She finds them sharp - a group of sloths learned how to open the bathroom door and one even used the toilet.

"The first time we thought it was a mistake. It was only after the fourth time we realised we had taught her how to go to the toilet," she said. “When I had my first baby, a friend observed that it was clutching my glasses and looking at it like it was investigating.”

Pool now also takes care of dolphins, anteaters, armadillos and porcupines. She is a real hero in the world of wildlife rehabilitation.

When animals are in trouble, she is the one you call!

More power to you Monique!