The imperative of strengthening India’s ties with Japan 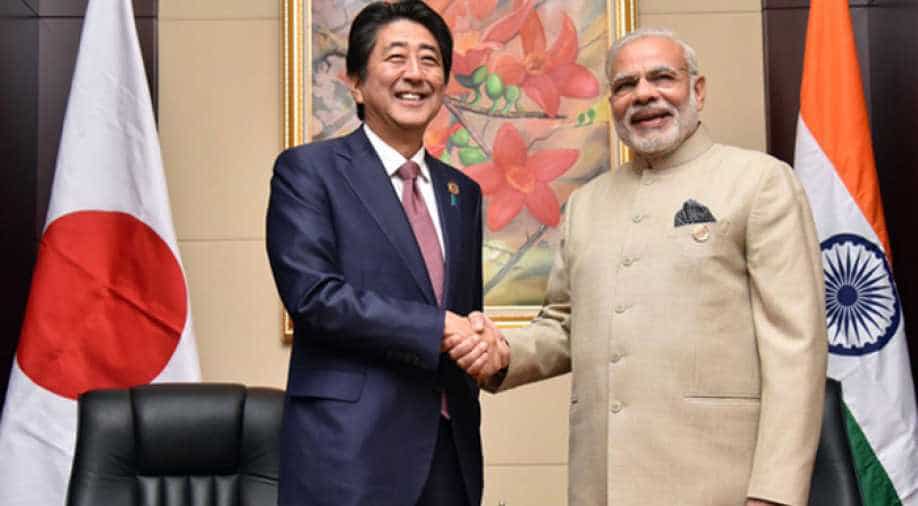 Japan has expressed its desire to strengthen cooperation with India in order to tackle terrorist groups such as Al-Qaeda, Lashkar-e-Taiba and Jaish-e-Mohammed.

Prime Minister Narendra Modi will hold an annual summit with his Japanese counterpart Shinzo Abe on October 28-29. Modi and Abe will not only review the current status of bilateral ties, but are also expected to take some concrete steps to expand their engagement.

For the two leaders, security and defence cooperation are of utmost importance. Over the last few years, security cooperation between the two sides has taken several strides. While India, Japan and the US conduct Malabar naval exercises, New Delhi and Tokyo also hold the annual Defence Ministerial Dialogue, the National Security Advisers’ dialogue, the ‘2+2’ Dialogue, the Defence Policy Dialogue and the Service-to-Service staff talks. They have also decided to enhance ties in this area by fostering defence equipment and technology cooperation in areas such as surveillance and unmanned system technologies, and defence industry cooperation.

For the first time, Japan will be an observer at the Cope India exercise in December between India and the US air forces. The Indian Army will hold the first ground force exercise with its Japanese counterpart next month. At the same time, Japan has also expressed readiness to provide state-of-the-art US-2 amphibian aircraft. Japan has expressed its desire to strengthen cooperation with India in order to tackle terrorist groups such as Al-Qaeda, Lashkar-e-Taiba and Jaish-e-Mohammed. During Modi’s visit, the two countries would reportedly sign the Acquisition and Cross-Servicing Agreement (ACSA).

This, in turn, would provide Japanese ships access to fuel and servicing at major Indian naval bases, including the Andaman and Nicobar islands. Modi and Abe said that differences should be resolved through dialogue and all countries, large or small, should enjoy the freedom of navigation, sustainable development, and a free, fair, and open trade and investment system. The two leaders also indicated the need to align Japan’s Free and Open Indo-Pacific Strategy with India’s Act East Policy.

The bonhomie between India and Japan comes at a time when China, with which India and Japan both have long-standing disputes, has undertaken aggressive posturing. Since these two countries also want to direction of global politics, they have a shared interest in preventing China’s growing clout. It is in this context that India and Japan are trying to engage with ASEAN countries, including Vietnam and Indonesia. The Quadrilateral Security Dialogue among the US, India, Japan and Australia was revived last year to promote peace and security in the Indo-Pacific. But it is equally true that the Trump administration’s inclination towards looking at things through the prism of ‘America First’ Policy, thereby jeopardising the security of US’ allies and partners, has also made it necessary for the two countries to foster close security and defence ties with each other and also engage other like-mined countries.

India’s $100 military-modernisation programme is yet another factor for the two sides to promote defence relations. Working with Japan will enable India to strengthen its ‘Make in India’ programme in the defence sector, which in turn will not only reduce the volume of India’s arms imports, but also enable it to realise its dream of becoming a major arms exporter. For Japan, transferring high technology to India will burnish its image of a reliable arms technology provider. This can be gauged from the fact that Hiramatsu, the Japanese Ambassador to India, has said that Japan has responded positively to Indian Navy’s ongoing submarine tender project 75I and is keen on collaborating in this area. In the past, Japan was reluctant to provide defence technology. But the proposed signing of an agreement on maritime domain awareness during Modi’s visit will add a new dimension to India-Japan defence ties, given Japan’s position as a world leader in anti-submarine warfare and maritime awareness equipment.

Infrastructure, trade and commerce will be another area of discussion during Modi’s visit. It is expected that Modi’s visit will witness some concrete efforts to develop Asia-Africa Growth Corridor, which can effectively counter China’s Belt Road Initiative. While the signing of the nuclear agreement was seen as an epoch-making event in the bilateral ties in November 2016, the fact remains that in the last two years no movement has been initiated in this area. So Modi should bring up this issue in his talks with Abe. Now, with the deepening convergence of interests in areas such as security, infrastructure, trade and commerce, the importance of Modi’s visit cannot be overstated.

The author is a Visiting Fellow, National Chengchi University, Taipei