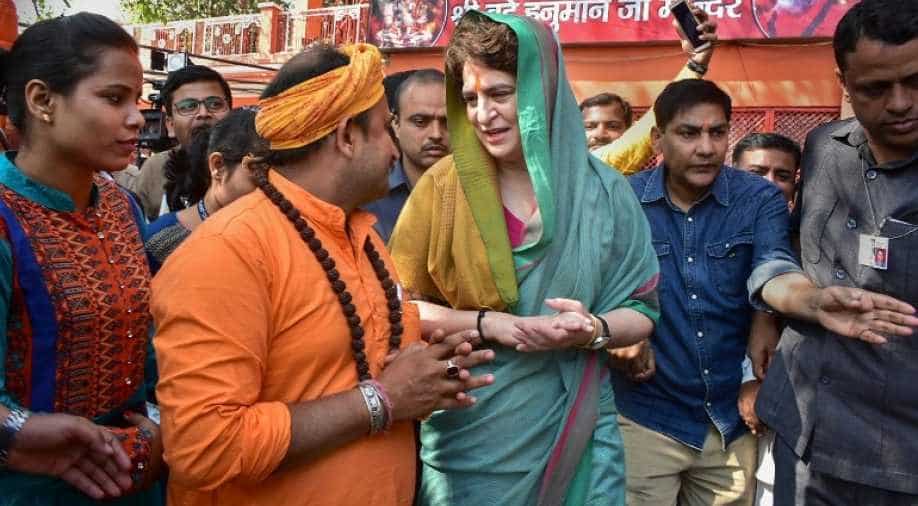 Priyanka Gandhi Vadra despite her charismatic persona has not been able to ditch the trappings of cultural Hinduism publically espoused by Prime Minister Narendra Modi.

Whether you like it or not, the use of Hindu symbolism is here to stay in Indian politics for a long time. What is happening in Congress today stands in stark contrast to Rahul Gandhi’s speech in Hyderabad in 2005 when the city hosted the plenary of the party.

Rahul Gandhi had said that the national flag is his religion. Today, Priyanka Gandhi Vadra despite her charismatic persona has not been able to ditch the trappings of cultural Hinduism publically espoused by Prime Minister Narendra Modi.

I would even say that not only it shows lack of creative engagement with BJP, but Congress has fallen back upon soft Hindutva which it practised in the 1980s, leaving socialist sloganeering to regional parties cutting across India.

When Mayawati and Mulayam Singh fought elections together in the 1990s in wake of Babri Masjid’s demolition, they did not evoke cultural nationalism to fight BJP on the ground.

The politics of social justice still evoked strong sentiments and it is for this reason that the political slogan,”Mile Mulayam Kanshiram, hawa mein ud gaye Jai Sri Ram,” could not be contested by BJP as either anti-national or anti-Hindu keeping in mind caste sensitivities attached.

Today, neither Mayawati nor Akhilesh Yadav has attacked BJP on cultural position it has taken. Priyanka Vadra and Rahul Gandhi too have appropriated BJP’s political narrative of nation-building rather than challenging it from a non-left centrist point of view.

It begets the question as to why Gandhi’s became so vulnerable on the constitutional vision of India, unlike the first generation who were far more westernised and rabid on the issue of religious reform and change in the society.

One, their religious identity as a Hindu was never in question and second, Congress as a party had strong conservative voices within the organisation. It allowed Congress to absorb and navigate hard Hindu politics led by RSS without pushing for any change in the Constitutional commitment towards the idea of India as conceived by the founding fathers.

The idea of India as conceived by the founding fathers was contested by RSS which argued that Constitution does not truly reflect the civilizational sensibility of the Indian sub-continent.

It is for this reason Congress will find centrist politics difficult, as it has failed to tackle ethnocentric political narrative which has marginalised them from 2012 onwards.

Congress today can neither go for the caste-specific alliance as regional parties or socialists of 70s, 80s and 90s were able to do so and nor it can push aside BJP on cultural nationalism as the theme originally belongs to RSS-BJP combine.

Congress needs to restore non-left centrism by authentic subaltern political sloganeering which picks up issues that are regional and cuts across caste and religion. At the central level, it needs to stick to Constitutional values which are being challenged in public for want of being unfair or unjust to the Hindu sensibility by RSS.