India-Maldives ties revived after a spell of uncertainty 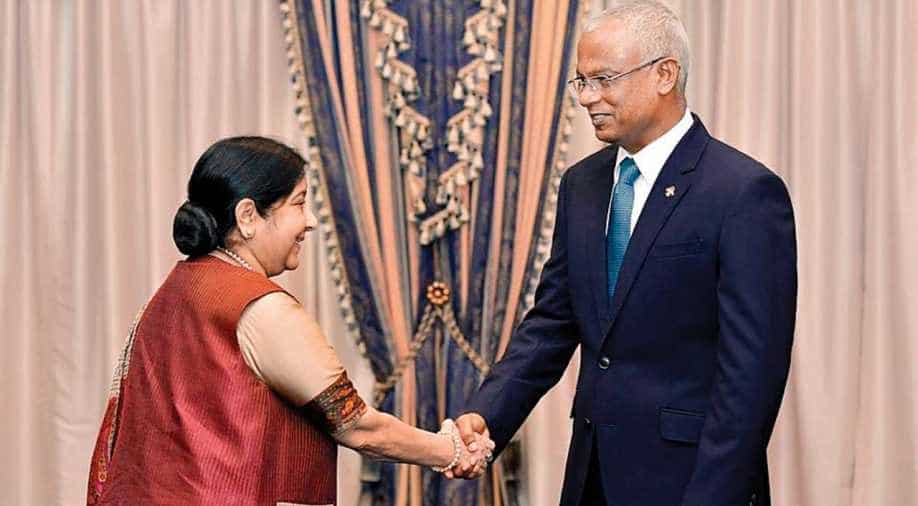 Foreign Minister Abdulla Shahid reaffirming his government’s “India-First Policy and commitment to working together closely with India” is a big diplomatic relief for India.

India and Maldives have finally reset their relationship with the visit of External Affairs Minister Sushma Swaraj to the country on March 18. It was the first time since the two sides held the full-fledged bilateral meeting in Malé since the new government came to power in Maldives after the September election. Swaraj and her counterpart Abdulla Shahid took stock of the bilateral engagement covering all areas of common interests and expressed their earnest desire to consolidate and expand ties.

In a normal course, the visit of Swaraj could have been treated as a regular diplomatic affair. But in the light of the tension between Malé and New Delhi when President Abdulla Yameen declared a state of emergency in the country in February 2018, Swaraj’s trip assumes significance. While President Mohammed Waheed Hassan had cancelled the contract signed with GMR, an Indian company in 2012, Yameen showed interest in strengthening ties with China. This can be gauged from the fact that Yameen endorsed China’s Maritime Silk Road. The two countries also signed the Free Trade Agreement in December 2017. A new law was passed by Maldives, allowing absolute foreign ownership of land on the conditions that interested parties would make a minimum investment of $1 billion dollar and reclaim 70 per cent land from the sea, which aimed at benefiting China in expanding its foothold in the Indian Ocean. Around the same time, in August 2018, Yameen also asked India to withdraw its military helicopters and personnel posted in Maldives.

Thus, when a democratically elected government led by President Ibrahim Solih assumed power in September last year, it was a great relief for India. PM Narendra Modi attended the swearing-in ceremony of President Solih. In December that year, President Ibrahim Solih paid a state visit to India, with the two sides reiterating their strong commitment to further strengthen and reinvigorate the traditionally strong and friendly relations between India and the Maldives. The visit of Swaraj was the latest development in redefining the engagement between the two sides.

Of course, given then President Yameen’s pro-China policy, it was felt in India that China, with its strategically Pakistan, could use the Maldives as a strategic choke point for India. The threat from Pakistan-backed fundamentalists is no less serious. Wahabi Islam has made rapid inroads into Maldives and the growth of terror modules in that country has raised concerns in the Indian strategic community. It is in this context that Foreign Minister Abdulla Shahid reaffirming his government’s “India-First Policy and commitment to working together closely with India” is a big diplomatic relief for India.

Maldives has emerged as one of the most important neighbours of India in geo-strategic and economic terms. It is situated mid-way between Strait of Malacca and Suez, which are the world’s busiest trade routes. At the same time, as Kerala and Lakshadweep are in close proximity to the Maldivian islands, India is cautious about the possible use of Maldives’s territory against it. The two sides have agreed to strengthen cooperation to enhance maritime security in the Indian Ocean Region through coordinated patrolling and aerial surveillance, exchange of information and capacity building.

But, given the fact that Maldives is a dept-redden country with $3 billion loans to repay, Malé needs major investment boost by India. Mindful of this reality, while PM Modi had announced financial assistance up to $1.4 billion in the form of budgetary support, currency swap and concessional lines of credit to fulfil the socio-economic development programmes of the Maldives, during Swaraj’s visit the Export-Import Bank of India decided to extend $800 million credit to Maldives to finance developmental projects. They have agreed on the need to boost private sector involvement, and the Maldives-India Business Forum will be held in 2019. Memorandum of Understanding regarding Indian Grant Assistance for Implementation of High Impact Community Development Projects through Local Bodies and memorandum of understanding (MOUs) on collaboration in the field of Energy Efficiency and Renewable Energy were signed to strengthen developmental projects in Maldives.

Undoubtedly, there is a marked positive shift in the relationship between India and Maldives in the last four months and it should be hoped that while the roots of democracy will be deepened in Maldives, Malé would not allow any third country to determine the fate of its historically cherished ties with India.