Hong Kong: Police legitimacy draining away amid spiral of rage and retaliation 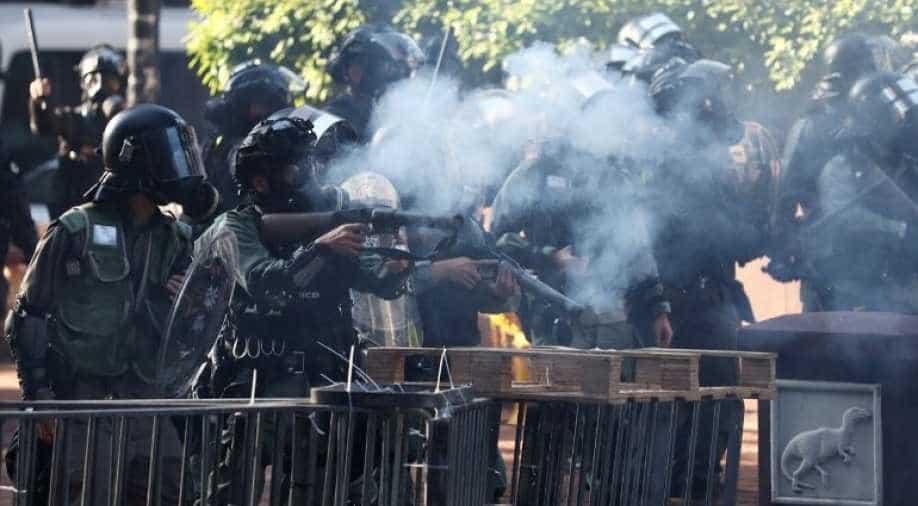 The restoration of law and order demanded by Beijing can only be achieved by reining in the police, not by further state violence.

The situation in Hong Kong has become decidedly more serious and more intense in the past week. The sporadic violence associated with small groups of protesters and police has escalated into full-scale battles. There have been two deaths, more arrests, more teargas, more people injured, some critically. Lines have well and truly been drawn and crossed by both sides.

The government claims it is in control of the situation but, among the public, there is a widespread belief that the police are being allowed to act out of control.

It was the death of a young student, Alex Chow, during a police clearance operation in early November, and the police shooting, at point blank range, of an unarmed protester a few days later, which prompted this turn to violence.

The exact circumstances of Chow’s death are still surrounded in mystery and rumour. The shooting on November 11, however, was caught clearly on camera, evidence of the unnecessary and disproportionate use of lethal force. The police had previously used live fire against demonstrators, but on those occasions, there was sufficient doubt about the level of threat posed by the protesters to deflect claims of unjustified police force. This time, however, the incident was so clearly caught on camera that the attempts by police spokespeople to justify it lacked all credibility.

Together with the force’s unwillingness to acknowledge any wrongdoing, this has simply contributed to the growing feeling that the police are now acting with impunity. Even in the face of clear evidence, no one has yet been held to account. Meanwhile, state media in Beijing began to describe the situation as “chaos”, a word reminiscent of China’s justification for its deadly crackdown against protesters in Tiananmen Square in 1989.

The police’s resolute rejection of allegations that they have abused their power is fuelling the public’s belief that the government is simply not prepared to listen to them. This is what some protesters have argued since the start, when the government failed to respond to the 2 million people who marched peaceably through Hong Kong in June.

The failure to persuade the government of the need for political reform and an independent police inquiry by peaceful means is the rationale of those who have turned to violence. But this has not, as some claim, resulted in “mindless acts of violence”. The protesters have targeted specific places and property associated with mainland China. Until this week, violence against the person was not part of their repertoire.

It was the police, not the protesters, who first opened fire and who have continued to engage in confrontational acts designed to provoke a reaction, including calling the protesters “cockroaches” and banging their shields as they move forwards in formation. This strategy has simply produced a spiral of action-and-reaction, descending into acts of revenge and retaliation on both sides.

Tear gas tales
But it is the police who have the weaponry. It is their tear gas, pepper spray, water cannons, rubber bullets and firearms which have posed the greater threat to life and limb. And it’s not only the groups of violent protesters who are affected. Verifiable footage, witness statements by lawyers, first aiders and Amnesty all testify to the police strong-arming of by-standers, spraying tear gas directly into the face of anyone who gets in their way.

The gas has also been sprayed in such volume that it has seeped into buses, the underground, and shops, afflicting one reporter with chloracne, a known effect of direct exposure to the dioxins used in tear gas. Face masks – commonly used to stifle the spread of germs during the flu season – are now being worn by some families inside their own homes because tear gas has been fired into their buildings.

Live television and Twitter streams footage of the police abusing citizens into their living rooms. Children, fathers, mothers and grandparents now have their own stories of daily, small-scale but deeply serious violations by the police. They have watched live video of the police spraying tear gas and pepper spray in enclosed spaces, directly into a person’s face at close quarters, and at very young children running along the street. They have heard police officers swearing at those they deem protesters, threatening them with batons and firearms, and – on occasion – talking between themselves in Mandarin, the language of the mainland, rather than the Cantonese spoken in Hong Kong.

Whether it be from the top deck of their bus, on the streets or in their living rooms, Hong Kongers have witnessed water cannon laced with blue die and chemicals spraying water indiscriminately along the streets, and even into the entrance of a well-known mosque. It’s precisely because police malpractice is so flagrant and unchecked that ordinary people in football stadiums, sports centres and shopping malls can now be heard booing the Chinese National Anthem, cursing the police, and filing out of their downtown city offices to show their support for the protesters.

When a police spokesman spoke on November 12 of the breakdown of the rule of law, it was not, therefore, on the protesters that the public first placed the blame.

Losing legitimacy
Since the 1997 handover, Hong Kong has been badly governed by a succession of weak leaders, but it retains its common law system, under which no one, including the police, is above the law. In common with police forces around the world, the Hong Kong Police receive special training in public order policing which should equip them to handle riot situations appropriately. Internal police guidelines also regulate the use of force in public order policing. It’s the existence of these regulations and legal restraints which, though imperfect, have until now led Hong Kongers to accept the police force as the only institution which can legitimately employ coercive means against the citizen.

But the visible lack of restraint exercised by the police in recent days has undermined this legitimacy. The fact that being captured on film has had no restraining effect whatsoever has convinced many members of the public that the police must have been given some assurance of immunity.

Carrie Lam, Hong Kong’s chief executive, has repeatedly stated her support for the police and refused outright to criticise their misconduct. An independent panel of experts said in mid-November that the existing mechanisms of police accountability were incapable of conducting a proper investigation, but so far the government has not responded to its recommendations.

It is this idea that the state actively sanctions police violence that has cemented the belief that the Hong Kong government stands against the people. Only the state can alter that. The restoration of law and order demanded by Beijing can only be achieved by reining in the police, not by further state violence. That is likely to transform the 2 million peaceful protesters of June into millions more protesters, coming to the aid of those on the frontline, fighting for their way of life. Strong-arm policing is not so much a sign of authoritarianism, as it is a symptom of a failed state.