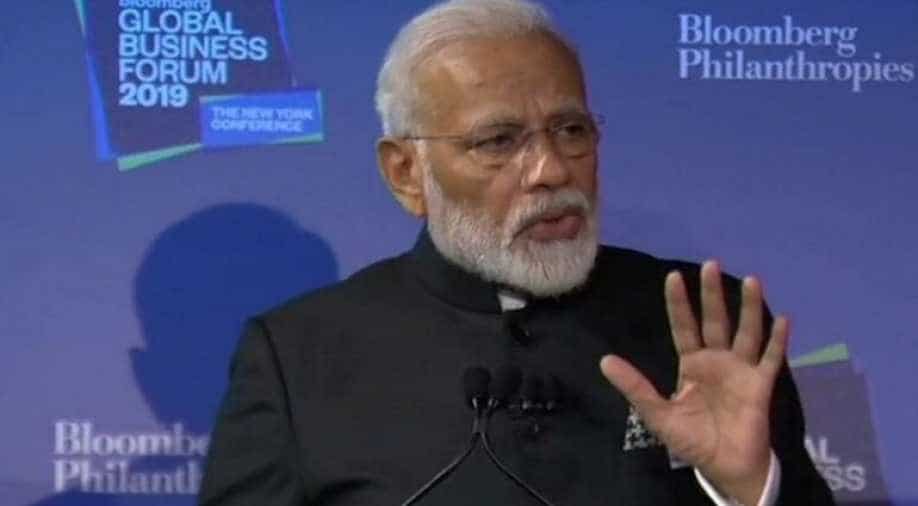 PM Modi showcased India's roadmap to becoming a $5 trillion economy. The event was attended by hundreds of CEOs and heads of states. He held a roundtable with 42 CEOs of top global companies. Photograph:( ANI )

Climate change is costing India $10 billion annually. By 2050 it can cost the country 2.8 per cent of its GDP.

Prime Minister Narendra Modi has been ‘Aladdinising’ India since 2014. The global recognition that he has brought to this country has given many Indians a spring in their steps.

The world’s tallest statue, International Yoga Day, the hug-fest with leaders, are all reasons for this. Added to it are his many master-stroke surgical strikes within the country, the most recent one being abrogating Article 370. These purportedly manifest the decisiveness of his leadership, which many claim India has lacked since independence.

However, behind this sheen, there are challenges that are beginning to pile up. It is not the unemployment at 6.1  per cent, a 45-year-high, or economic growth at 5 per cent which is a 6-year-low that is digging a deep grave for the $5 trillion vision.

The Prime Minister and his Cabinet, need to do the math and appreciate the impact climate change can have on the economy.

Sure, there has been a sea change in Modi’s understanding of climate change — from claiming, “Climate has not changed. We have changed. Our habits have changed,...” to creating the International Solar Alliance with France and other countries to facilitate the implementation of solar energy projects, to now being recognised as a stalwart of environmental protection with the UN Environment Award.

But the question remains — Is India climate change-proof? The answer can be found in the following examples. Responding on February 15, 2019, to an unstarred question No. 310, Minister of Agriculture and Farmer Welfare stated, “Climate change is projected to reduce the timely sown irrigated wheat yields by about 6 per cent in 2020 scenario from existing levels.”

When late and very late sown wheat also were taken into consideration, the impact is projected to be about 18 per cent in 2020 and 23 per cent in 2050.

Further, the Central Research Institute for Dryland Agriculture has identified 151 out of 572 rural districts to be highly susceptible to climate change.

According to the 2018 Economic Survey of India, annual farm incomes could decrease 15-18 per cent because of Climate Change, which could go up to 20-25 per cent in unirrigated areas.

As per the National Initiative on Climate Change Resilient Agriculture (NICRA), “Since agriculture makes up roughly 15 per cent of India’s GDP, a 4.5 to 9.0 per cent negative impact on production implies a cost of climate change to be roughly at 1.5 per cent of GDP per year.”

But that is not all. According to the Institute for Energy Economics and Financial Analysis (IEEFA), between 2013-17, water shortages caused 61 coal plants to be shut down.

This resulted in a loss of 17,000 gigawatt-hours (GWh) of electricity. However, it is not only that Indian coal-fired thermal power plants have low Plant Load Factors and are polluting, but they are also huge guzzlers of water - beyond permissible limits in many cases,  as per the IEEFA report. In fact, 87.8 per cent of industrial water consumption is by these plants.

Will India see a fight between different water consumers — from agriculture to industry and households? Given their dependence on water and the pollution generated from them, one would imagine that coal-fired thermal power plants would be seen less kindly.

In the same period, solar increased from 4,600 GWh to 39,268 GWh. Though the growth in Solar seems to be high 88 per cent versus 18 per cent in coal, the overall contribution of solar to the electricity sector is just 2 per cent.

According to a research paper, India’s economy is 31 per cent smaller than it would have been in a climate change-free scenario.

Already, as per government figures, climate change is costing India $10 billion annually. By 2050 it can cost the country 2.8 per cent of her GDP.

A more recent study claims that climate change may shrink the Indian economy by 10 per cent. So the two main engines of growth in India - agriculture to feed and nourish Indians and electricity to power Indian industry are susceptible to climate change.

In such a scenario, whither the $5 trillion dream? One has not spoken about the fallout from the increase in disease incidence or from extreme weather events etc. So, what has India been doing to adapt to, and prevent climate change?

According to ‘Towards Climate Resilient Agriculture Through Adaptation and Mitigation Strategies’, a NICRA publication, 10 activities have been initiated at the village level.

These vary from building resilience in the soil to projects such as mini weather observatories in villages.

However, because of the unpredictability of climate change, one is not sure whether these efforts will be enough especially when the government is still investing in climate-destroying coal-fired thermal plants and busy cutting 1.09 crore trees in the last five years.

The government has incentivised e-vehicles, but this makes sense only if solar or wind is used to charge their batteries.

That being said, at an individual level there is enough reason to worry and many options available to help the country become climate change resilient.

For example, up to 45 litres per capita of water is wasted per day in India. This is also a waste of electricity because power is needed to pump the water.

Further, 40 per cent of food is wasted in India. This is not only a drain on resources but is a nutritional loss.

If one can reduce wastage, it has a ripple effect that goes far beyond the individual. A stimuli to the economy with a tax bonanza or getting the LIC to prop up failing PSU’s or taking Rs 1.76 lakh crore from the Reserve Bank of India (RBI) reserves may not be enough to catapult the economy into the big league if climate change is ignored.